Santa Fe, NM -- (ReleaseWire) -- 06/07/2017 --State Employees Credit Union (State ECU) one of the 200 Healthiest Credit Unions in the U.S. as ranked by DepositAccounts.com in 2017, will hold a Ribbon Cutting and Grand Opening from 11 a.m. to 2 p.m. on Friday, June 23, 2017 at the newest State ECU branch, located at 3521 Montgomery Blvd. NE in Albuquerque. State ECU members, along with the public and press, are invited to attend the celebration that will feature a ribbon cutting with the Albuquerque Chamber of Commerce at 11 a.m., as well as food, giveaways, games, and a live remote with country station KRST Nash.

The new 5,000-square-foot branch will be a full-service facility with five teller stations, three drive-thru lanes, a drive-thru ATM, night deposit drop box service, and local lending offices. According to State ECU CEO/President Harold Dixon, the shift from a leased space to a State ECU-owned property greatly expands State ECU's footprint in Albuquerque. "This newly built branch offers almost twice the square footage—and significant improvements such as more parking, better building access, and plenty of room to grow." Dixon explains that the credit union in its former location was at capacity. "In addition to overall heightened convenience at the new branch, we intend to add new staff members to better serve our busy Albuquerque community."

The opening of the new branch marks the completion of a transition to all State ECU-owned facilities—now holding steady at seven locations. (The leased Albuquerque branch was closed June 5 when the new Albuquerque branch opened its doors for business.) This investment strengthens State ECU's commitment to the Albuquerque region, which has seen an uptick in membership in relation to the Kasasa checking program as well as from a commuter population that works in points north of the area. "We noticed the growth of our membership here and felt it was the right time to serve them with a new modern branch," says Dixon.

Along with all State ECU branches, the new Albuquerque branch will be a member of the Co-op shared branching network and will welcome the business of other credit union members.

About State ECU
State ECU, with nearly $500 million in assets, is the 8th largest credit union in New Mexico. As a financial not-for-profit, State ECU is dedicated to serving its members and the community with integrity and accountability. Founded in 1958, State ECU now provides financial services to nearly 42,000 members with local support, decisions, expertise, and convenience. 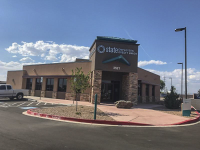