Fort Lauderdale, FL -- (ReleaseWire) -- 02/04/2015 --MoonLanding Media is a Florida based production company headed by producer David Mahecha. "Music has always been a growing passion of mine. In postproduction we always seek music to fit our imagery. We use music as an enhancing element. Great music can make a dull moment impactful; in the same way a great visual can bring music to life. My job is to create a visual representation of the emotions that have been captured in the lyrics. We are very exited to have been approached by such a unique talent as Absoloot. Music videos are just the beginning of what we have planned."

David explains that video blogs, music videos, freestyle videos and live video stream Q&A sessions are just the beginning of what's to be expected. "We are going to use all of the resources available to us to reach Absoloot's fans. Not only will they have access to his videos, but they will also have access to him. We have other amazing surprises setup for the new album."

Absoloot has always been at the forefront of relevant content, from songs about our soldiers in "American Soldier" to tracks about the economic struggle in "Banksters". Absoloot's empowering and socially relevant tracks have all of the makings of a truly conscious rapper; a consciousness that had been reflected in the music created during the start of the rap genre. With the current state of affairs, both here and around the world, youth culture is in need of some thoughtful and positive music to help a generation of listeners who are often misguided.

Expect big things in 2015 from Absoloot, as he may be the answer to the world's woes. With an album re-release, a new album later in the year, and a production deal, it seems major things are happening at the Absoloot camp.

To watch the "Watch Your Words" video visit https://www.youtube.com/watch?v=LDmtEdm_mUo 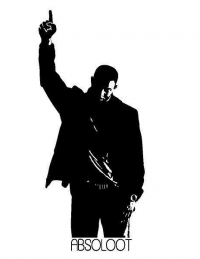