"Straps" is a "Cabin in the Woods" meets "Tucker and Dale vs Evil" horror that asks the question: What if Jason Voorhees, the hockey-mask-wearing serial killer from the "Friday the 13th" movies, was actually the good guy the entire time and we've all just got it wrong for all these years?

Over the next few months, the Straps team plans to finalize their casting choices. They are currently on track to begin principal photography by spring of 2019.

"I think our movie is going to really appeal to that old school Friday the 13th nostalgia," says Straps producer Matthew David. "But it will also give an original twist on the slasher genre that audiences are going to love. It's going to be one big wonderful and bloody fun time!"

Logline: A thrill-seeking tour group hunts for evidence that a machete-wielding 1980s era serial killer still lives in the woods, but end up caught in the crossfire between the killer and a greater evil.

To learn more and to keep up to date with the latest news, visit: www.strapsthemovie.com.

About the Straps Team
Straps is the creation of Matthew David, who wrote the original screenplay and will be directing the film. Matthew David has been producing web series, short films, and spec commercials for the past 7 years. A graduate from the cinema program at LACC and the Second City Conservatory program, his screenplays have received acclaim and awards. Undead Outlaws won first place at the StoryPros Screenplay Competition and the Top Ten Semi-Finals for Showtime's Screenplay Competition and Red Comet placed in the Top Five Finals for the ScreamFestLA Screenplay Competition. He has also produced a number of award-winning short films. Love and Paint went on to be licensed to the DirecTV channel ShortsHD. Straps will be his first feature-length movie.

Michael Olsen is the executive producer of Straps. In 2009, Mr. Olsen established TriStar Film Finance. The company—with offices in Vancouver and L.A.—was formed to service an untapped niche in the marketplace. It provides producers with one-stop-shopping for film financing, corporate structuring, and business services primarily for lower to mid-budget film and television productions. Since TriStar was officially launched in July of 2009 the company has provided film financing and services to several independent feature films. These include; Bad Karma with Ray Liotta and Dominic Purcell, Clockwork Girl with Carrie-Ann Moss, Paradox, a sci-fi thriller starring Kevin Sorbo; Daydream Nation, a romantic comedy, starring Kat Dennings, Josh Lucas and Andie MacDowell; and Blood: A Butchers Tale, a vampire / horror film starring Aaron Douglas and Kim Coates. For more information on Mr. Olsen and Tristar, visit: www.tristarglobalentertainment.com.

Moving Pictures Media Group, also known as MPMG, will be co-producing Straps. MPMG is a production company founded for motion picture, television, and internet content. MPMG provides a full suite of services to assist independent filmmakers, production companies and investors in the development, production, post-production, distribution, and marketing of their projects. Managing Director and Chief Creative Officer, Michael Minkler is a three-time Academy Award winner for his outstanding work on Black Hawk Down, Chicago, and Dreamgirls. A seasoned professional who has collaborated on over 200 projects with Hollywood's elite directors, his most recent works include the Academy Award-winning film, The Hateful Eight, written and directed by Quentin Tarantino. Chief Legal and Operations Officer, Ron Takehara, has a wide range of legal experience in the entertainment industry, from high profile cases involving motion picture and television industry litigation to representing entertainment production companies, television networks, actors, stunt men and women, and screenwriters. For more information on MPMG, visit: www.movingpicturesmg.com.

Finding a unique take on the horror genre is, needless to say, very difficult. It seems like every conceivable variation of villain, the twisted serial killer, the supernaturally enhanced madman, or the vengeful.

I, therefore, approached the concept of a horror movie somewhat differently this time – forget about the killer…what would make the victims unique? What would make them stand out from every other screaming face that gets cut down by a machete or pulverized by a torturous contraption? Well, what if getting killed by the supernatural wasn't their obstacle to overcome?

What if someone like Jason Voorhees, the hockey-mask-wearing serial killer from the Friday the 13th movies, was the good guy the entire time and we've all just gotten it wrong for all these years?

My homage to the slasher flicks of my youth was thus born. Straps is a tribute to the movies that gave me nightmares, that made nighttime walks home from a friend's house a terrifying endeavor in my empty, small-town Iowa streets. And that, for some reason, kept me going back to see them again and again. 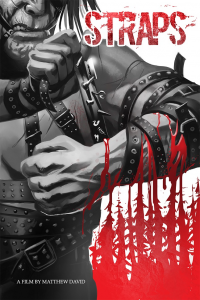 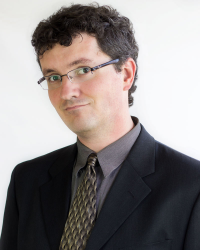