SubPlug Aims to Deliver the Best Earplugs for Swimmers

Hong Kong, China -- (ReleaseWire) -- 05/29/2018 --Many swimmers use earplugs to prevent water from getting into the ear canal, potentially causing ear infections. However, most of the products currently available on the market are cheap, uncomfortable and ineffective. Innelo aims to change this trend with its latest product, the SubPlug.

These earplugs are designed to solve all of the problems associated with many existing earplugs. For starters, the ear inserts are made from soft silicone for maximum comfort. These inserts come in three different sizes to accommodate ears of just about any size. Wearers will no longer have to worry about forcing a too-large plug into their ear or risk losing one that is too small.

Another major complaint that users have about typical waterproof earplugs is that they don't allow any sound to pass through. This means that users have to take out the earplugs in order to talk to their friends. This can also create safety issues, as wearers are unable to hear what is going on around them. SubPlugs incorporate an innovative mesh covering on the outside that blocks water from getting in, while still allowing sound waves to pass through.

Finally, SubPlugs include anchors (also available in three sizes) to keep the earplugs secure in the users' ears. This way, users won't have to worry about losing their earplugs, especially once they get wet, a common problem with standard earplugs.

To help bring SubPlugs to the masses, their creators have launched a crowdfunding campaign on Kickstarter. The campaign has a funding goal of $15,000, of which it has already generated over $3,000 from more than 140 backers. The campaign will continue until June 21 and must meet its goal by the conclusion in order to receive the funding.

Campaign backers can earn a variety of rewards based on the amount of their contributions. Starting at $8, the first 200 backers can receive a pair of SubPlugs. This constitutes a 39-percent discount off the expected retail price. After these early bird offers have been fulfilled, the Kickstarter price for the SubPlugs will go up to $11, which is still a 15-percent discount. Innelo will begin shipping products out to customers all over the world in July 2018. 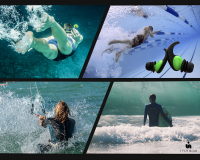