With Wisdom, Humor, and Advice for Your Embryonic Self

Randolph, MA -- (ReleaseWire) -- 07/18/2017 --"Do you know what I've discovered about being born? It is not for the faint of heart." So says Eleanor L. Tomczyk in Monsters' Throwdown, the first book of a three-part memoir. Tomczyk, a popular humorist blogger, writes, "Even if you're born in the best of families with all your emotional and material needs set in place, it is pretty obvious from the beginning of every human's life that you're entering into a world of hurt."

Tomczyk wasn't, in fact, born into the best of family circumstances. She was born to a Black mother who lived in an East Cleveland ghetto, denied her pregnancy, and told people that she had a tumor in her abdomen. Then she gave birth in a toilet -- all before the Civil Rights movement began.

With a troubled mother and an inadequate childcare system, Tomczyk traipsed from one foster home to another, and found herself in and out of Cleveland's one "Colored" orphanage before the age of twelve. She felt branded and stigmatized for many years.

However, Tomczyk not only survived her childhood, but she thrived as a teacher, actress, singer, award-winning voiceover artist, blogger, and a memoirist. She also became a wife in a loving marriage and raised two daughters who are now prospering in their thirties. During her "journey of emancipation," as Tomczyk puts it in her second book, Feeling Oz, she discovered that "God is not a Republican (as some Christians would have us think), and he actually loves liberals and atheists, too."

While she started out as a "… Black-conservative oxymoron, Bible literalist, evolution-denying, right-wing Christian…who proudly boasted of my membership in mostly all-White churches as a beacon of racial harmony and understanding," she eventually found redemption. "I'm no longer one of 'those kinds of Christians,' and I have found my voice as a 'born again' human," Tomczyk notes.

In part three of her journey, the latest installment of her memoirs, The Fetus Chronicles, Tomczyk shares words of encouragement and wisdom with the unborn child she once was via a series of imagined podcasts. She tells her embryonic self all of the things she wishes she'd come into the world knowing.

For example, she confides, "You're not the only one, Embryo-self. Through the years, you'll meet or read about tons of people all over the world of different faiths, who refused to accept the caste of bad blood and its history they have been splattered in...Others like you will encouragingly tell you what you already know: I refused to stay in the place I was born, accept the lot I'd been given, or acquiesce to the limits that others put upon me because I knew I was different -- that I didn't belong there -- no matter what anybody said. That, Little Blueberry, will make all the difference to you in the world."

She tells her prenatal self, "The good news is you will someday find where you belong, and you won't have to sell your soul to get it. It will start with discovering who you are (better late than never), what it is you want out of life, and not being afraid to go after it. You'll find the man -- your true love -- and true friends who love you for who you are, and you won't have to put yourself on the auction block to be accepted."

She finishes that podcast with the message, "By the time you're in your 60s, you won't give the time of day to people who don't 'fit' with you or your sense of well-being. Trust me in this, Fetus-self. You'll be so secure in your concept of who you are and where you fit in the scheme of things that you'll be tempted to cross-stitch a door plaque for your home that reads: 'The only people welcome across this threshold are people I love and adore, who love me just as I am, and in whose presence I belong. To all others -- I don't care one rat's ass whether you like me or not because you are not invited to my party!"

The Fetus Chronicles: Podcasts from My Miseducated Self (a mostly true memoir)
By Eleanor L. Tomczyk
Howthehelldidienduphere Publications
ISBN: 978-1544749792
2017
www.eleanortomczyk.com 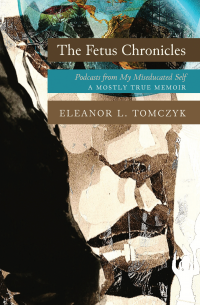