Chicago, IL -- (ReleaseWire) -- 12/19/2017 --Swaggy Clause, the all-new Christmas brand celebrating swag is introducing the first action ornament of its kind. The brand is live on global crowdfunding platform Kickstarter and raising funds to bring the project to life.

As legend goes, many years ago, in the coldest depths of the South Pole, a very different Santa Clause was born in the Santa Clause Nursery. This Santa Clause arrived with a full head of black curly hair and without a round plump belly like the other Santa Clause babies. The Santa Nurses were so enamored by this Santa Clause that they gave him a special nickname, Swaggy Clause.

While attending South Pole Academy, where the young Santas learn all there is to know before becoming full-time Santas, Swaggy Clause was often teased. One day Swaggy Clause had an epiphany after learning what "swag" really is. He realized that it's okay to be different from the other "traditional" Santa Clauses. He embraced who he is - Swaggy Clause!

Growing up Southern California, Scooter Vaughan remembers the classic ethnic tree his mom would put up every year. It had the same three different ornament styles, but about 50 of each one. Even today, there's little variety in ethnic ornaments.

"In the winter of 2017 following Christmas, my mom and I talked about how she still rarely finds ethnic Christmas ornaments. We laughed that nearly 15 years after she first started putting up an ethnic ornament tree, she still can't find any more ethnic ornaments to complement the tree," says founder and CEO Vaughan on the inspiration behind the project. "When I typed in 'Black' or 'African American Santa ornaments' into a search engine, the only ornaments that would pop up were the same ethnic little drummer boy and African angel that have hung from my mom's tree for over a decade. At that moment, I realized that for that to change, I needed to do something. Appropriately, on that cold winter day, the dream of Swaggy Clause was born."

A 3D-print version of Swaggy Clause was created shortly after to determine if he could not only hang from a tree, but also stand independently and bend at the joints while carrying a present sack on his back. After completing the 3D Print, the schematics were finalized creating the first action ornament of its kind. The ornament hangs perfectly on the Christmas tree and can also be displayed on any flat surface, such as a bookshelf or fireplace mantle.

Along with the Swaggy Clause ornament, the company will also be introducing Swaggy Clause ugly Christmas sweaters. The sweaters will have unisex sizing and will be an inch longer and oversized for that cozy, Christmas feeling.

"Swaggy Clause was created to bring Christmas an ethnic ornament that my mom, and hopefully others, will enjoy seeing on their trees. He was made to let kids know that Santa Clause doesn't have to be old, have a white beard, or a huge belly. Santa can be whoever you want him be," adds Vaughan.

Swaggy Clause is currently live and available to support on Kickstarter: http://kck.st/2yMlEwU.

About Swaggy Clause
Hailing from the South Pole Santa Academy, Swaggy Clause is here to bring some swag and style to you this Christmas season. 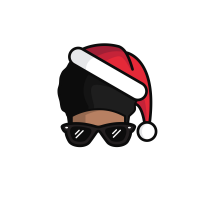 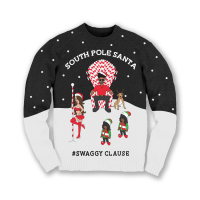