"Parents who question football's safety must read Tackling Dummies. As a neurosurgeon who has treated concussions received by football players at all levels for nearly twenty years, I have never read such an enjoyable, yet technically proficient book about football and how to play safer. It's a fantastic read!" ~Dr. Oszkar Szentirmai – MD, Neurosurgeon, Martin Health System

For decades, we've been teaching our kids to start playing tackle football earlier, hit harder, practice longer, and play like the pros. What if our current thinking about football coaching and culture was all wrong?

Pee Wee League players are getting paid to play football. Football conditioning is a year-round endeavor. Our kids are sustaining concussions before they reach high school. And, worst of all, many young football players are sacrificing everything to make it into the NFL history books…an almost impossible goal that isn't all it's cracked up to be. No wonder they're not having any fun anymore.

As a former college player and current high school football coach who also spent two decades away from the game, Tackling Dummies uniquely offers both an objective and insider's look into the sport and culture of football.

With real football stories from a number of amateur fields including high school and youth football, concussion treatment and prevention protocols, descriptions and photos of safer and more effective tackling techniques, football tactics, and honest insights into college and NFL "careers", this book is a must-have for any football fan, player, coach, or parent.

"Tackling Dummies" is a must-read for anyone who wants youth and high school football to be safer, yet just as exciting." ~ Gregg Easterbrook– Author, The Game's Not Over and New York Times columnist, Tuesday Morning Quarterback

About Bobby Vernon
Bobby Vernon is a successful businessman and former college football player. He received his MBA from Duke University and his undergraduate degree from Georgetown University where he played football for the Hoyas.

Bobby Vernon currently coaches high school football in Miami, FL where he lives with his wife and three sons. He is a speaker and writer and remains active as both an investor and board member in the financial and technology industries. 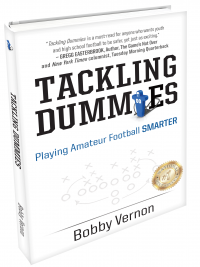 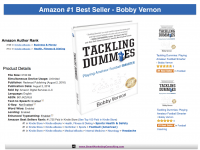