Los Angeles, CA -- (ReleaseWire) -- 05/12/2016 --Only one in five people in the USA speak a second language while in Europe that figure is 54% with English being the most popular. To help those who struggle to communicate in a second language for business or travel, a translate app is available called Takeasy.

Takeasy, which is the world's first remote on-line real-time & instant live human translator & interpreter, has become an important tool for people wishing to communicate to find out directions, book a hotel room, report a crime, and even for business meetings. As well as providing a picture, audio and text translations, it also provides One-to-One instant translation services, providing a user with their own personal translator.

A spokesman for Takeasy said: "We wanted to develop an app that would remove the problems people have when visiting a foreign country and trying to communicate with another person. The app provides a person with their own personal translator at a time when they need them, breaking down language problems they may face."

The App is simple to use. When using the personal translator service the user chooses which language they would like to translate and once they have made their choice, they press the green button. They will then be put through to a personal translator where the user can give them instructions such as, "how to say can I have a hotel room with a sea view." As well as being told how to say something in another language, the user can also request how to write it down, showing how powerful the app is. This unique service breaks down the barriers that millions of people come across while travelling the world.

Takeasy was released on April 22, and already it has become a highly recommended app with many saying it will replace the foreign language phrase books. By having the app on the phone, it not only provides help when needed, but it also removes the needs to carry around bulky phrase books to try and communicate. It currently supports nine languages that include: Chinese, English, Japanese, Korean, French, German, Russian, Spanish and Portuguese.

The new language translator app is going to change the way people communicate and remove the struggles that people have when visiting another country for business or for pleasure. A recent report found that only a small percentage of holidaymakers report a crime in Spain due to not being able to communicate in Spanish, Takeasy would remove that problem.

About Takeasy
Takeasy removes the problems people have while trying to communicate in another country. It provides people with an expert translator service on hand when needed. 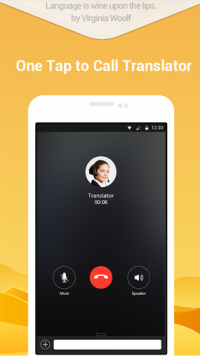