TakeOff Running Captivates the World with Its Newest Version

It looks like TakeOff Running has created an even bigger stir with the recently updated version that was released to the world. Gamers in the US, India, Egypt and so many other places all over the world have been completely drawn in to this app. From the overall game play to the incorporation of social media features, the new TakeOff Running features have turned into something past interesting.

Columbia, SC -- (ReleaseWire) -- 08/15/2014 --Development Innovations really took their time with launching TakeOff Running. After several months of creating such a unique, endless running game, TakeOff Running was finally birthed. Now that the new updates have been launched to the world, not only are gamers seeing what makes it so unique, but they also get to see what makes the hysterical storyline so intriguing for gamers.

Imagine this. Two teenagers are home alone and they get caught kissing by an angry parent. This parent clearly doesn’t want some teenage boy coming into his home and kissing all over his daughter, so he balls up his fists and charges forward. As the boyfriend jumps out the window and takes off running down the street, the angry dad chases him as fast as he possibly can. While ducking and dodging the many obstacles, the angry father is waiting for the perfect opportunity to grab Christian by the neck and choke him for kissing his daughter. At this point, this awkward situation turns into a hilarious one...

About TakeOff Running
So, while gamers are enjoying a good laugh with this storyline, they are also taking advantage of the newly enhanced gameplay incorporated into this game. When gamers select a character, the longer they stay in the game, the faster the game speeds up. While the characters are ducking and dodging oncoming traffic, moving crates and other obstacles, there's still the opportunity to take advantage of upgrades. Some of those cool upgrades include zipping through traffic on a nifty scooter or running headfirst into a bolt pack to help you fly through the skies. If that doesn't help, purchasing a few lifesavers would also help.

Another way the gamers are benefiting is by getting a load of available freebies in TakeOff Running. How are they doing this you ask? Well, one way is through logging into Facebook and Twitter. When gamers log into their social media accounts to "brag" or share their high scores, they instantly get free coins. The great thing about logging into their Facebook and Twitter accounts is that it helps to get the conversation going while also creating some healthy competition between gamers and their friends. Friends as well as other gamers get to see the type of progress you've reached in the game and this helps to add to the competition with several people gunning for that number one spot on the leaderboards.

So, while there are several things that could be elaborated on from TakeOff Running, these are just a few. Check out TakeOff Running for yourself and download it from the Google Play Store. 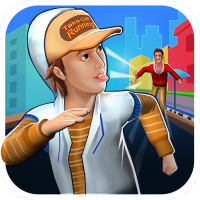