Smart Crowdfunding is slated to carry out strategic marketing initiatives for the ‘Taker’ campaign on Indiegogo. The Taker project is crowdfunding to bring an innovative new Bluetooth device with voice recording capability to market.

Los Angeles, CA -- (ReleaseWire) -- 10/21/2014 --Hong Kong based ‘Taker’ has launched a crowdfunding campaign on Indiegogo in order to introduce their Taker Bluetooth headset with voice recording capability. This campaign has a funding goal of $80,000, which needs to be raised by November 6th in order to bring their inspired new device to market. The Taker team wanted to make driving safer for everyone who engages in hands-free conversations on the road, while also solving the big problem of remembering or safely transcribing important information from calls or messages.

As the team states, “If someone calls me when I am driving, I can talk with him and focus on the road with Bluetooth headset easily. However, I cannot write down the messages at the same time because it will be dangerous to remove my hand from the steering wheel.” With the Taker device, a person can record the conversation for reference later, or vocally transcribe notes and messages.

The voice recording feature of the device works with the Taker Voice App which is downloaded to your smartphone. The Taker set comes complete with the Bluetooth headset with ear loop, two sets of ear buds, USB cable and the voice app. Taker is very user friendly, and works with any mobile phone that possesses internal Bluetooth technology. With the simple press of a button, a user can record an entire conversation or record a voice message for reference later. The recording can just as easily be played back by double clicking the button. At this time, the voice recording feature is only compatible with Android systems due to the fact that iOS software currently does not support the Taker Voice recording App. However, the company is also releasing a Snapshot App which works with both Android and iOS systems. This app allows mobile control of a camera using the Taker device.

The Taker team has been hard at work completing all of the essential groundwork for their device. They are now ready to move into the next stages of mass production, which is why they are reaching out to the crowd through their Indiegogo crowdfunding campaign. The funding will be used for: app development and improvement, product tooling finalization, antenna refinement, firmware refinement, and all associated government based legal costs. Taker supporters have the chance to pre-purchase various amounts of the device from a single Taker Bluetooth set to a “Wholesaler Package” of ten. They are also offering a “Thank You” perk which enables a contributor to show their support and follow the campaign.

Full details can be found on the Indiegogo campaign page

About Taker
Taker is a Hong Kong based company that is owned and operated by a group of men, each with their own specialty. Together they have manufactured the taker Bluetooth device. Gordon Kwok is the founder and product designer. Roy Law works with Apptask Ltd., and is using his experience in mobile app development to perfect the Taker device. Edward Fung is a product manager with 18 years of experience in the field of consumer electronics.

To learn more about the Taker crowdfunding project Click Here

To contact via email write Gordon Kwok at: gordon@apppea.com 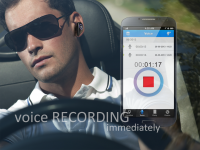