Mishawaka, IN -- (ReleaseWire) -- 09/22/2016 --Tasty Peach, an Indiana-based boutique offering Japan-inspired clothing, metal and enamel accessories, and plushies, has announced a new Kickstarter fundraising campaign for their line of new Giant Meowchi plushies. The campaign offers backers first access to these brand new, giant-size 12 by 15 inch plush kittens with a variety of incentives based on pledge amounts.

Meowchis, a line of 5 inch plush mochi kittens available in over 20 variations, were first created in 2012 by Tasty Peach artist Ryan Zanfei. With just one type first produced, the windswept popularity quickly led to a demand for more types of these quirky, pint-sized plushies.

Since then, Meowchis have become a staple character for the Tasty Peach brand. The Giant Meowchi comes thanks to a high demand for larger variations of these cute and collectable plush pals.

The two-person strong team opted for Kickstarter as a means to produce this highly demanded item as efficiently as possible. Crowd-based fundraising eliminates the need for inventory storage by directly fulfilling orders as they are produced. As the Kickstarter page notes, the total amount of backers will help the team gauge the popularity of the project – and produce enough Giant Meowchis to fulfill customer orders without the added expense of storage.

There will be two different types of Giant Meowchis produced for this initial production run. First is the Sakura Meowchi, which includes pink blossom patterns on her soft fabric and a detailed plush accent with even more blossoms near her ear. The second, the Unicorn Meowchi, features a beautiful array of dazzling colors for his horn, mane, and tail.

Since the campaign's launch, public reception has already shown the immense demand and popularity of both the Giant Unicorn and Sakura Meowchi Plush. To learn more about the campaign – or to make a pledge – the Kickstarter page details all the pledge options available. The campaign ends soon, so backers are urged to take advantage of these pledge incentives now before it's too late.

About Tasty Peach Studios
Tasty Peach Studios is a Mishawaka, IN-based boutique delivering uniquely designed, Japanese-inspired merchandise. Originally started as a clay charm and commission artwork operation on Etsy, the popularity led to explosive growth with a broad range of products available. These include high-quality metal and enamel items, jewelry, accessories, messenger bags, wigs, and clothing. Their popular line of Meowchi Plushies has remained the cornerstone of their catalog with the Giant Meowchis showcasing the next generation of this highly desired line of characters. 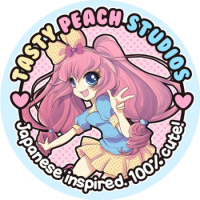