Teaching Diversity in View of the Norway Tragedy: When I Woke Up the World Was Yellow

Book Quote: “We need all the colors! We can’t tell what’s what! I want all the colors back when I wake up.” Marcia Gaines Mercer, When I Woke Up the World Was Yellow

Franklin, NC -- (ReleaseWire) -- 07/25/2011 --Franklin, NC-With the horrific tragedy in Norway and the discovery of the suspect’s anti-multiculturalism webpage and neo-Nazi beliefs, educators around the world again emphasize the need to teach children the value of diversity.

We were surprised to find Marcia Mercer’s children’s book, “When I Woke Up the World Was Yellow” being sold in so many countries. What is it about the children’s book that has captured the interest of readers in so many nations? She has answered a few questions in the following interview. Her new children’s book has been out a little over a month and keeps selling out.

“When I Woke Up the World Was yellow” is about a feisty heroine who loves yellow, but everything yellow is too much. She misses blue but when blue takes over, everyone looks like zombies. How many single color takeovers will there be before our heroine can put the world right? Like all heroines, she struggles ahead on her unique mission, which in her case is diversity.

We were interested in children’s (age3-9) comments about the book. Samantha thought the book was cool and she liked the pink colors best. Mikey liked the book because the world keeps changing colors and he especially liked the red takeover because, “it looks like blood.” Wyatt liked the orange world with the sheets of orange falling from the sky. Children’s eyes light up with Juan Colla’s magical art.

The children were undecided about a world filled exclusively with their favorite color. At first they thought it might be a good idea. As they thought about it and discussed it, a light bulb seemed to go off in their head that diversity creates beauty. Our heroine learns that diversity is a gift that we seldom appreciate, until it is lost!

We asked Marcia Gaines Mercer, the author of “When I woke Up the World Was Yellow,” some questions about her book.

Question: Could you comment on the massacre in Norway?

Marcia Mercer: It is tragic and it shows educators will be more challenged than ever to teach values that respect diversity. The neo-Nazi belief structure is one of racism and it is better to deal with this when children are young. My children’s book is only one way children can discuss diversity in a way they understand. Conversations with children on the book seem to influence attitudes but I think it is a fun book. Our heroine will fight for diversity in her own unique way.

Question: How do you go about writing a children’s book on diversity?

Marcia Mercer: Most of my books have simply come to me. I wake up and they are in my head, planted there. If they are dreams, they don’t come with a visual, just words. I write everything down over the next day or so, and then tweak it.

Question: Could you tell us something about the meaning of the book from an author’s perspective?

Marcia Mercer: I don't see it as a book about colors, although it is fine if others do. I see it as a book about diversity. Gordon, when asked about politics and which side he is on, will sometimes reply that he believes in the two party system. He will then explain what would happen to politics and how much worse it could be if we only had one view of things. I like to think in some simple way the book helps children see that we need more than one way of looking at the world and need ALL the colors when we wake up!

Question: What are your hopes for the book?

Marcia Mercer: I would love for it to be used as a teaching tool on diversity.
Question: Most children’s eyes light up as they read a story about a world of changing colors. Little boys, especially, see the possibilities. Do you see your children’s book being adapted to the world of movies?

Marcia Mercer: I think it would make a great film! If readers like it and see possibilities for a movie, let me know.

Question: Where can children and parents buy the book? It sold out in the United Kingdom on Amazon Books but they have ordered more copies. It is being sold in China, India, and Australia. Why do you think your book has global appeal?

Marcia Mercer: The theme is universal. Differences are good and essential to well being and happiness. It is difficult to get word out if you are a new author. Some bookstores have it but Amazon Books and Barnes and Noble and Books Unlimited are where most are buying it.

Question: What have been the challenges of working with a publisher and illustrator?

Marcia Mercer: Mirror publishing and the illustrator Juan Carlos Colla are great to work with and I appreciated Barbara McRae of the “Franklin Press” editing it.

Question: What will be the name of your next children’s book and when will it come out?

Marcia Mercer: My next children’s book, if all goes well, will be “Burley Tree.” Burley Tree is a young Yuppa Tree who believes he is not as beautiful as the thin and stately trees around him. He learns how valuable he is and how wonderful it is to be Burly Tree. Like all new children’s book writers, I get many turn downs before I get published. I worked on getting published for over 10 years, so perhaps I have payed my dues; I wished many times before my children’s book came out!

Dr. Gordon Mercer is international president of Pi Gamma Mu International Honor Society and is professor emeritus at Western Carolina University. Marcia Mercer is a writer and columnist. Her children’s book, “When I Woke Up the World Was Yellow,” has been published by Mirror Publishing. 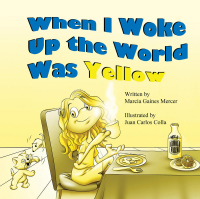 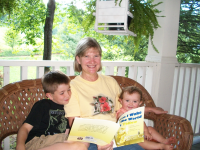