After visiting over 70 schools and inspiring more than 60,000 students, Kyle Prue is re-releasing his award-winning book The Sparks just ahead of book tour to promote literacy in at-risk teens.

West Bloomfield, MI -- (ReleaseWire) -- 02/27/2017 --Kyle Prue began writing the Feud Trilogy at just 16 years old. Now a freshman at the University of Michigan, Prue is the Award-Winning Author of The Sparks. During the books first launch, The Sparks won numerous national and international awards for Best YA Fiction including: state and national awards from the Florida Authors and Publishers Association, the Florida Book Festival, the New England Book Festival, Midwest Book Festival, Southern California Book Festival, and the International London Book Festival. Prue also won International Moonbeam and IndieFab awards for Best Young Author. Prue is re-releasing an updated version of The Sparks with a stunning new cover and additional content. "As a child, I lived in a fantasy world all the time—I was always inventing stories and reenacting fantasy," expressed Prue. "I lived in costumes. I had a cat suit that I particularly loved. My mom would always get me a new costume for Halloween and inevitably I would end up back in my cat suit when it was time to go trick-or-treating."

The Sparks takes place in the city of Altryon, where three families ordained with superpowers have been feuding for centuries. The Vapros can teleport and turn their enemies to ash, the Celerius have super speed and the ability to heal from any wound, and the Taurlum have skin like steel and godlike strength. The story follows Neil Vapros as he attempts to become an assassin to please his overbearing father. After failing his first mission, Neil learns that a sinister new force has awakened. This mysterious new power threatens to shatter the established order and the lives of everyone in Altryon--regardless of their family name or allegiance.

With action and adventure, Prue weaves a story that USA Today calls "otherworldly and relatable. "

Prue, currently an acting major at the University of Michigan, decided to defer his first year of college to finish the next two books of The Feud Trilogy, The Flames (print release date: April 25, 2017) and The Ashes (release TBD). During his year on tour, Prue ran into an unexpected series of events that would ultimately change his life and the lives of the kids he touched in the process.

The entire book is based on a family feud so that was the reason for the series name, Feud. But the individual titles are The Sparks, The Flames and The Ashes; these are symbolic of the Vapros family motto which is "Victory Lies Within the Ashes." The Vapros turn a person to ash when they kill them. For them that is a macabre way of saying, "You have to bust a couple of heads to get what you want." The titles reveal that there is going to be a lot of bloodshed and a climax to this storyline, which we are building up to in the series. This week the audio version of The Sparks is been released and voiced by Jon Eric Preston, an actor with talents in Greek tradedies to avant garde works and who also has his own traveling Children's Theatre groups in Tallahassee FL and Long Beach, CA; and became a SAG BookPAL reader.

"A media specialist at a local middle school asked me to speak to three classes of at risk students." shared Kyle. "At the time I was a high school senior in Naples, Florida and had just published The Sparks. The teens were at risk of dropping out of school and some were even at risk of suicide. They were struggling readers and many had never read a book. I spoke with them about some of my middle school struggles, about how writing was an escape for me, and my inspiration for writing The Sparks. Each student also received a free copy of the book. Thus, something powerful happened at that visit. Unexpectedly I started getting calls and emails from teachers and parents. The kids devoured the book, some started a book club and one even started writing his own book."

At that point Kyle realized he had a chance to make a difference. He founded a non-profit, Sparking Literacy, to pair author visits with book donations for at-risk and underserved students. Thus, far the effort has been a huge success visiting 70 schools and inspiring 60,000 students. Prue is heading back on tour to continue his work to inspire teens to read, write and follow their dreams. He began to working to have numerous events with Beyond Basics and City Year in the Detroit Public Schools as well as many schools in southwest Florida.

The mission of Sparking Literacy is simple; inspiring teens to read, write and follow their dreams. Sparkling Literacy is doing this by hosting events in schools with authors of young adult books that appeal to teens. The organization is working with teachers to find creative ways to use these books so teens are excited to read for class. Author's books are donated or subsidized so that teens who struggle with reading have a copy of the book while they are inspired to read. We are also sponsoring badly needed audio books as they are a great tool to help teens with learning difficulties to learn to read and better understand the material. In addition, we are starting Sparking Literacy book clubs in schools to encourage teens to keep reading.

Jon Eric Preston has been performing on stages since the second grade. He grew up in the military, and found a knack for acquiring dialect speech through his extensive travels. After 5 years as lead singer and lyricist for the band Zombie Birdhouse and a semester of studies in London, Preston returned to complete his degree in Theatre from Florida State University in 1997. His stage performances have ranged from lead roles in the Greek tragedies to the avant garde production. He received awards for his Dramatic Interpretation skills while on the Florida State Speech and Debate Team as well. Narrating multiple roles for audiobooks is a natural match and joy for Preston to express through.

To learn more about Kyle Prue, visit his website at http://www.kyleprue.com 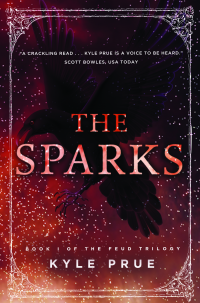