Christine Koth, physical therapist, explains how tightness in the hip is a hidden source of pain in her new bestselling book, Tight Hip, Twisted Core.

Walnut Creek, CA -- (ReleaseWire) -- 08/23/2019 --After decades of practice as a physical therapist, Christine Koth saw a pattern emerge. Nearly everyone had a tight iliacus muscle and next to no one was aware of it. In her practice, this pattern of tightness soon became a predictable root cause of pain in the lower back, hip, tailbone, knee and foot. After countless successes releasing the iliacus and zero evidence that this muscle is being widely addressed by anyone else, it was time for a paradigm shift. Christine decided to put the iliacus muscle on the map in her best-selling book, Tight Hip, Twisted Core - The Key to Unresolved Pain.

"A tight iliacus initiates a battle, causing a tug-of-war in the core and a chain reaction down the leg and up the spine." - Christine Koth

Christine Koth, MPT is a holistic physical therapist who has specialized in the hip area for decades and has been aptly named the "Iliacus Queen." She also invented the Hip Hook to replace the magical iliacus release technique she has mastered with her hands.

As the 5 star reviews attest, this book has brought the iliacus muscle out of the closet and into the living room. Its effect is no longer being ignored. The iliacus (rhymes with "silly yak kiss"), along with the psoas, makes up what is commonly called the "hip flexor." As a result of too much sitting, driving, running, biking, kicking, heavy lifting, yoga, dance, gymnastics, or stress, a tight hip could be the missing link to enjoying a pain-free life.

Tight Hip, Twisted Core outlines "3 Simple Steps" to get your hip healthy and your core aligned, helping you to resolve your pain without expensive treatments, surgeries, and medications. 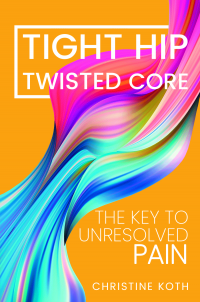 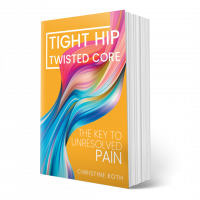