The Boarder Kontrol Skateboard by StreetBoardz Is the World's Safest Skateboard

Fear the downhill slope no more.

Sydney, New South Wales -- (ReleaseWire) -- 01/21/2016 --Australian-based StreetBoardz has introduced the world's safest entry-level skateboard. The lack of brakes and balancing system has always made the prospect of learning to skateboard a daunting one; StreetBoardz has solved all of those problems with their innovative 'Boarder Kontrol.'

Boarder Kontrol is a simple two-part system. The skater pulls the leash cable which in turn pulls the brake levers. From there, the brake levers push pads against steel discs on the back of the rear wheels. The harder the user pulls, the quicker the board stops. The leash enables the rider to brace and balance during braking.

Streetboardz has been manufacturing skateboards and distributing internationally since 2009 but it was only recently during a product meeting, that the team became curious when they noted that skateboards were the only wheeled vehicles not fitted with standardized brakes. Further exploration and research confirmed that this is for a good reason.

Bikes, cars and scooters have practical braking systems because handlebars, seats and seat belts brace the operator but a skateboard rider (standing upright) is vulnerable to the forward forces created if a board slowed suddenly with a rider standing on top.

Subsequent research indicated that this lack of control was a major deterrent for many people from ever considering to ride a skateboard. So the company experimented with bracing options and the Boarder Kontrol braking concept was born.

Boarder Kontrol is truly the world's greatest entry level skateboard. It takes away all the general fear and safety issues usually associated with skateboarding while still enabling riders the same enthralling experience of riding down a hill at controlled speeds on their board.

The Boarder Kontrol has an 8-ply deck, weighs 3.75 kg (8.3lb) and is 37.5 inches (95.25 cm) in length. Backers can also pledge to order a retrofit system, transforming traditional skateboards into the leash-enabled, braking Boarder Kontrol system.

Boarder Kontrol boards start at $108 on Kickstarter with multiple quantities available at an additional cost.

Boarder Kontrol by StreetBoardz is now live and available for purchase on Kickstarter:
https://www.kickstarter.com/projects/1008703715/boarder-kontrol-skateboards-brace-yourself/description

About StreetBoardz
Streetboardz is board-riding development company that has been manufacturing skateboards and distributing internationally since 2009. Their core product range have been specialized skateboards which are used for surf training. Surfing Australia's internationally recognized "Hurley High Performance Centre" has been using Streetboardz as an integral part of their skill development programs and we estimate that over 80% of Australian pro-junior surfers would have trained on Streetboardz at some stage in their surfing careers over the past 5yrs.

Additionally Surf Coaches all over the world use the Streetboardz surf training boards as coaching tools for their surfers. These coaches include; Barton Lynch ASP World Champion 1988 and world-renowned surfing coach Martin Dunn. Boarder Kontrol is a registered trademark wholly owned by Streetboardz International and the Boarder Kontrol leash-activated braking system has been patented in most major commercial markets. 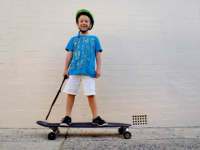