"The Challah That Took over the House" - Jewish Book Inspires Unity

New York, NY -- (ReleaseWire) -- 03/10/2017 --Author Melissa Berg, specializing in eclectic Jewish books for kids and young adults, celebrates the upcoming release of "The Challah That Took Over the House". In this children's book geared toward young girls, four girls must overcome their differences to stop a challah monster from taking over the house.

Raizy has just moved to a new building inhabited by three other girls who do not get along. The girls return home from school on Friday with challahs ready to be baked. Each girl thinks her challah is the best and insults the others.

As a result of their bickering, the challah grows and grows into a challah monster and takes over the house. The girls must put aside their dislike and work together to stop the creature. If they fail, Shabbos will be ruined for them as well as the whole neighborhood.

Complete with challah recipes in the back of the book, parents can enjoy making creative challahs with their child. 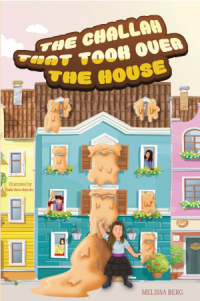