The Day Is Won, but the War on Gun Violence Continues Online!

New York, NY -- (ReleaseWire) -- 05/27/2010 -- DCTV’s New York City Tour has concluded, visiting seven high schools in five days. The tour was a resounding success, reaching hundreds of students in Manhattan, Brooklyn and the Bronx. Over the past week, students have been actively engaging with DCTV presenters, responding to films and powerful stories and offering insight into the causes of and solutions to gun violence. Beyond Bullets visited Bedford-Stuyvesant, Brownsville, Hunts Point, Harlem and the Lower East Side, speaking to middle- and high-school students, most of whom have felt a direct impact of gun violence. When asked if they know someone who has been killed by a gun, almost every hand in the room went up. In a classroom in Harlem, a quarter answered that they have lost someone this year.

One aspect of the tour that resonated with students was the host, Ronald Merritt. His story of tragedy and renaissance struck a chord with students everywhere he went.

“I was a drug dealer, I’ve been in jail, people called me ‘Du da Shooter,’ because that’s what I did, I had a gun strapped to my waist,” Ronald began, “I lost 36 friends to gun violence and decided I was done. I put down my gun and picked up a camera. Now, my camera is my gun.”

Empowered by his past, Ronald went from a world of violence to one of creation. He now produces documentaries, fiction film and music videos. He used his life experience to encourage students to find alternatives to violence.

“A good friend would talk you out of shooting someone. They would be saving the life of not only the person you'd shoot, but also your own."

After each presentation, students crowded Ronald, asking how they could start media projects of their own. Beyond Bullets has given them the answer. DCTV is taking the fight online with BeyondBullets.org, a new resource for curing America’s Gun violence epidemic.

All year long, teenage journalists will be sharing their stories on BeyondBullets.org. Visitors can explore videos, images and news updates from the frontlines of the war on gun violence. Coming from voices ignored by traditional media, these videos expose the shocking truths behind faceless statistics. Visitors are encouraged to upload their own videos about their neighborhoods, with prizes awarded to the best user-submitted material. BeyondBullets.org extends the scope of the project past New York’s five boroughs, with stories and news from around the county in cities with a history of violence, such as Detroit, Washington D.C. and Chicago. Since the tour began, the site has seen over twice its normal traffic.

Ending gun violence in America is a seemingly insurmountable enemy, but the progress DCTV has made by giving students a beacon of hope is critical, and over the next year, BeyondBullets.org will continue to provide New York and the world with an arsenal of weapons to with which to wage the war on gun violence.

DCTV's Beyond Bullets Media Campaign is supported by the New York Community Trust and the Community Information Challenge of the John S. and James L. Knight Foundation. 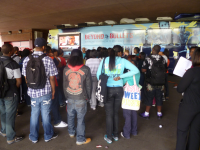 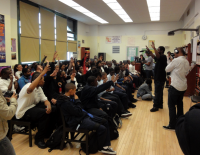