Brooklyn, NY -- (ReleaseWire) -- 08/18/2017 --Christian rap artist, NoahSoundz announces the launch of his album entitled, "I'm Home." Often described as "The Eminem of Christian Rap," he uses intricate word play with an incredible ability to paint pictures with lyrics on the new release. Self-described as having a God-given talent, he explores his ability to relate to people with his music. To that end, with the new Christian hip hop album, he will reach out to listeners from all walks of life. Simply stated, he uses his talents to bring hope to listeners who can relate to the real life topics he tackles.

He says, "As a follower of Christ my foundation is built on spreading love and the word of God." Humble and dedicated, Noahsoundz is on a mission to show the world that hip-hop music does not have to be bound to its cliches. This music can be clean, inspirational and a positive force in people's lives.

After releasing several freestyles and mix tapes in 2012, NoahSoundz landed the opportunity to be featured in a mixtape produced by "21 The Producer". This project also featured rap artists such as Ludacris, Xzibit, and many others. In 2016 after building a buzz online for his upcoming debut album "I'm Home," his success in his social media campaign landed him a number of opportunities to perform locally.

Early reviews say, his debut album is an emotional rollercoaster in a sea of mediocre rap. His tracks are excellently produced, but they also stand out for his unique lyrical mastery, as well as his ability to turn a beat into a powerhouse of groove and melody. A skilled wordsmith and performer, he has a smooth and consistent flow, which sits perfectly well within the mix. Hailing from Brooklyn, New York NoahSoundz' music is direct, uplifting and positive, with a unique attitude and a powerful vision.

Find out more and let the music do the talking at www.noahsoundz.com.

About NoahSoundz
NoahSoundz brings a refreshing feeling to the rap genre and sets the bar high when it comes to storytelling and emotionally conscious rap. As a family man and a father of two, NoahSoundz hopes to go on tour eventually. For now, his plan is to continue his passion as a recording artist and songwriter as well as share the good news of the Gospel with the talents and tools that God has given him. 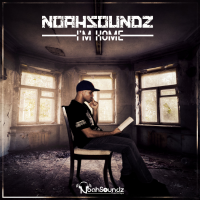