Anchorage, AK -- (ReleaseWire) -- 08/22/2016 --The Falcon, a revolutionary new airship reinvented with modern technological capabilities making it the ultimate aerial choice for everyone, is live on Kickstarter and raising funds to bring the project to life.

In a sky filled with drones, the Falcon Airship stands alone. The airship resurrects overlooked technology and combines it with modern advancements to create a safe and silent flight with enough power to fly for days.

"I've been obsessed with airships since I was 10 years old. I became infatuated with a fictional series about sky pirates. These characters would have incredible adventures aboard "skyships", and that's what got me hooked," says founder Lucas Wright. "Unfortunately, airships died out a long time ago; my whole life has been spent trying to bring them back. And I eventually realized the only way to accomplish this was to give everybody access to the technology. So I set out to create what is now the Falcon."

Resembling the shape of a classic blimp, the Falcon is constructed of several components. The hull, or body, is composed of a shell and a bladder. The shell is made of a special lightweight fabric and possesses all the outfitting you need for handling, as well as the fins. The fins provide directional stability. Within the shell is the bladder. The bladder is a welded, gas-tight film inflated with Helium. Helium is an inert noble gas, completely safe, and lighter than the air in the atmosphere. The atmosphere pushes upwards on the Falcon because of this fact, just as the ocean pushes up on a ship, keeping it afloat. The Flacon takes advantage of this effect by containing this gas and attaching a method of control. This means the Falcon can stay aloft for days on its own.

The Falcon is inherently silent. This means users can capture live audio, without having any interference from the platform (unlike a drone). This also means that users can capture footage or conduct research in areas that are sound sensitive, like ceremonies or wildlife habitats. The shell is constructed of a durable rip stop fabric, protecting the bladder from damage in the event of a crash. And in this unlikely event, the balloon-like nature of the Falcon keeps everyone (and everything) protected. The Falcon also includes a Flight-Termination-System built into the payload mount. Simply flip a switch in an emergency, and a hole will open up in the body, causing the Falcon to descend safely.

The Falcon is the definitive choice for aspiring pilots and photographers. Because of the tether, the Falcon is able to fly stable indefinitely. It also moves with the anchor point of the pilot, meaning energy and focus can be spent on the craft rather than piloting. The Falcon is also equipped with an incredibly 24 hour flight time, meaning it can stay up in the air as long as users need to accomplish their goals.

"When it comes to flight times, the Falcon blows it's completion out of the water. Nothing comes close to the 24-hour rating. This capability will open up whole new markets that didn't even exist before," adds Wright, "Furthermore, the payload is interchangeable, so you're not just limited to photography. Everything from ground mapping equipment to the classic advertisement banners are possible, and all with one platform. On top of that, the Falcon is completely silent. This means you can film events or ceremonies without interrupting what you're trying to capture."

The Falcon Airship is currently live and available to support on Kickstarter: http://kck.st/2bqLe2E

About Arctic Sky
Arctic Sky designs and builds personal use airships. The company is inspired by the wilderness and beauty of Alaska, in which the business is based. This lends to unique products crafted to survive any environment. The founder has a background in high altitude airship design, and carries the spirit of innovation into the challenges Arctic Sky overcomes. 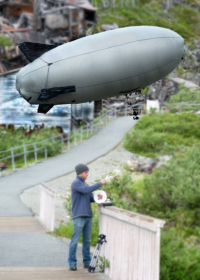