In his book, Bornholdt details the myths versus the realities faced by the gauchos. These Brazilian cowboys are surrounded by a mythological persona, the heroic gaucho of the past. However, present-day gauchos are mostly poor ranch workers whose lifestyle is threatened by the expansion of commercial agriculture, in a regional context where the survival of cattle ranching is closely tied to the labor relations between gauchos and landowners.

"Bigger Than Life: Cultural Identity and Labor Relations Among Gaucho Cowboys in Southern Brazil" is now available in hardcover, paperback and electronic editions at www.amazon.com

About the Author Luciano Bornholdt
Luciano Bornholdt is a social anthropologist from Brazil with a Ph.D. from the University of Manchester. He conducted fieldwork research with indigenous groups from the Amazon region and other parts of Latin America, gauchos and ranchers, people displaced from their homes by infrastructure projects, and descendants of German and Italian immigrants, among others. Luciano built a career in international development, working as a social development specialist for multilateral development organizations such as the Inter-American Development Bank and the World Bank, before retiring from that line of work and embarking on a long term tour around the world. Having walked to Santiago de Compostela as a pilgrim and spent some time in Asia and New Zealand, he plans to continue traveling for the foreseeable future. 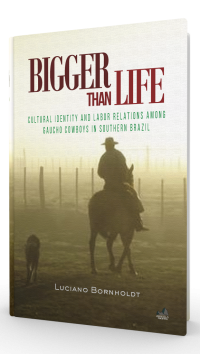