Los Angeles, CA -- (ReleaseWire) -- 07/02/2018 --The Future Clothing is the first company fully dedicated to helping children affected by America's current Opioid Crisis. They launched online Tuesday, June 26th and are offering exclusive and limited quantity items at igg.me/at/thefutureclothing or at FTRNOW.com. They believe that the children traumatized by this epidemic have been forgotten and are not getting the proper support needed. They don't consider themselves a clothing company, but instead as a movement to help these children.

Here's the four ways you can show your support for these children through The Future Clothing:

Buy One, Give One: Every purchase you make is matched and sent to an affected child.

Send Inspiration: Clothing is inspirational by design and features an inspirational story of celebrity role-models that have changed the world, despite their own tough childhoods.

Donations to Youth Charities: Proceeds are donated in your home state.

Become Penpals: Connect with a Young Future and send empowering messages of hope and love.

"Until now, there has been no way to directly help these children, which number in the millions," says Owner Jon Linville. "We've got half a million kids in foster care, a baby born addicted every 15 minutes, millions of children living with their grandparents, and now kids are using heroin themselves just to cope. These are the kids that have witnessed their parents die or been the ones calling 911 during the frequent overdoses." The opioid crisis is the worst drug crisis in America's history and there is no sign of it slowing down, yet.

"There is no company in the world doing what we're doing," says Jon. "We're connecting with all 50 states and providing you a direct way to help our children. People really want to help, but most don't know how, and they want this direct connection. Not only do the proceeds go to your own state, but you actually get to communicate, through us, with these children as penpals. I believe allowing people to become role models and just showing that they care will have profound impacts that can truly change the course of these children's lives. This will really show these children that we, as a country, believe they matter and believe that they have a future."

The Future Clothing is currently online only, but they're based out of Huntington, WV, known as the "Overdose Capital of America," although, more recently known as a "City of Solutions." The Future Clothing believes this gives them the unique opportunity to work with those that have been fighting the hardest, take these solutions, and spread them nationwide. Their mission is to "inspire children of drug crises so that they believe they matter and realize their future," by sending their message, "You are The Future," through their clothing, penpalships, and support to youth charities. Visit FTRNOW.com and click "Go Now" or go directly to the campaign at igg.me/at/thefutureclothing. The Future is Now. #FTRNOW 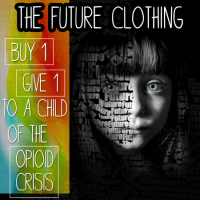