The Highfields Vol I of Double EP "She Said. He Said." out June 2nd

Los Angeles, CA -- (ReleaseWire) -- 05/15/2017 --The Highfields are sending out good vibes in 2017 with this quirky, feel-good EP. #GoodVibes single available for download now when you pre-order the album!

Indie pop rock duo The Highfields is set to release the first installment of their double EP "She Said. He Said" on the 2nd of June 2017. "She Said" features six original songs.

"She Said. He Said" represents an evolution in sound for The Highfields. Nate and Kaelie Highfield spent several months in late 2016 hibernating in their Agoura Hills studio, pushing their limits, and figuring out a new direction for the upcoming release. Their first experiment "Bold" was immediately featured in a Living Spaces Ad and helped set the tone for the new sound.

Now, even before the release of the EP, two more of the songs ("Express Yourself" and "Beauty") have already been featured in other ads. In contrast to their more organic first release "A Little Color," "She Said. He Said" dives into the world of synth pop, while still maintaining that upbeat Highfields attitude.

Volume I "She Said," revolves around Kaelie's unique vocals, while Volume II, "He Said" scheduled to be released in the summer of 2017, will feature Nate's fresh, distinct sound.

Good Vibes, the carrier single of the EP is about discovering positive energy and spreading it to everyone you meet. Hear and download the track now when you pre-order the EP.

The Highfields, formed in 2011 have loved exploring these new vibrant sounds, and with multi-Grammy winner Rob Chiarelli adding his considerable talents to both EPs, these releases promise to hit the mark with its cool, edgy, feel-good vibe.

"She Said" will be available on June 2nd via iTunes and other digital stores.

About The Highfields
Nate (former lead singer of "The Good Cheer") met Kaelie (formerly of "Evan Brightly") while on the bumpy road of an indie tour. The two became fast friends and soon after joined forces, in life and music. And The Highfields began 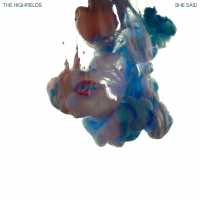