The Horror Box Scares Up an Audience on Kickstarter

Ellicott City, MD -- (ReleaseWire) -- 06/21/2018 --The Horror Box, a quarterly subscription that delivers high-end items from the makers & creators of the horror film industry, is officially launched on Kickstarter. It includes everything a horror fan would want in an ultra cool box.

The boxes are for the horror fan that is looking for a better subscription box, and will be delivered through USPS each and every quarter (Halloween, Christmas, April Fools, & Indepencence Day).

Each box will include Scream Magazine - rated the world's #1 horror magazine, autograph from a horror legend, a wearable, art print, collectibles and at least one exclusive item.

Every quarter will include a high-value collectible chase item that will be randomly given to one subscriber.

The Horror Box was created because two guys who love the genre wanted to bring horror fans a better subscription box. Simply put, made for horror fans by horror fanatics.

"Receiving subscription boxes ourselves in the past have left us underwhelmed. We are on a mission to provide a better experience for the horror fan, while connecting them to the makers & creators of the horror film industry."

Eric Crowe is a business professional from Ellicott City, Maryland - USA. Running his first company at 27 years of age, Eric became a serial entrepreneur taking on more business roles shortly thereafter. He currently owns Energy Supply Company, which is the world's first & only monthly subscription service providing unique energy drinks since 2015. Eric's love for the horror genre dates back to his childhood where he practiced special effects makeup on himself and others, eventually competing at a high level. Eric believes his business & subscription box experiences were just stepping stones to pursuing his true passion: to bring horror fans the subscription box they deserve!

Mark Russo is a graphics & fine arts professional who also hails from Ellicott City, Maryland in the United States. Mark utilizes his various artistic skills on a daily basis by designing solutions for some of the largest brands in the world. He owns Mark Russo Creations which offers a wide array of artistic services and experiences including mix media art classes in the Columbia Art District. Mark's love for superheroes, monsters, and horror movies began at a young age when his father, a horror fanatic, used to take him to the movies for double features. Now Mark's talents and attention to detail add to the quality that is one of the founding reasons they started this project...The Horror Box. 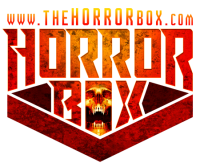