Los Angeles, CA -- (ReleaseWire) -- 07/29/2013 --Vlad the Impaler, long considered the basis for Bram Stoker’s Dracula, is rising from the grave once again! Full Moon Films and Afflatus Productions has announced the arrival of Derek Hockenbrough’s ‘The Impaler’. The film looks to retell the origin story of Dracula through the notorious Romanian ruler’s death and legacy. However, Vlad III seems to be appearing in more than the gore-ridden Indie Horror flick. Universal Studios has announced that their Dracula reboot ‘Dracula Year Zero’ will also be centering on the transformation of young Vlad III into the fanged demon that we all love.

Hockenbrough reassures horror fans that ‘The Impaler’ is sure to keep you on your feet. “You won’t find any sparkling Ken doll vampires here. We wanted to bring back the demon in vampire. That’s what we loved as kids and what better human host for a demon than Vlad III?”, Hockenbrough said of the movie, “This being an Indie film, we are able to get away with a lot more than the studios. Our goal was to make a truly evil Dracula movie that would please both the hardcore genre fans and the general person just looking for a good scare. Either way, it’s going to surprise you.”

Synopsis: Seven high-school friends begin their Euro-trip at the actual castle of Vlad the Impaler where he supposedly sold his soul to the Devil over 500 years earlier, but the decrepit castle's past envelopes them in a bloody ritual.

The company behind the film is still considering different distribution options, however at least a limited theatrical run in Los Angeles around Halloween has been confirmed. This is going to be one to sink your teeth into!

Follow ‘The Impaler’ is Bringing Back Vlad With Fury – First Look at Official Trailer! 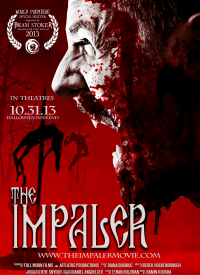