The Limitations of Asperger's Conquered Through Original Electronic Music

Douglas, MA -- (ReleaseWire) -- 10/22/2014 --Stephen Weinman is a 17-year-old high school student who has always struggled with what many would deem to be the simple things in life, such as everyday chores, schoolwork, and anything involving organization. Stephen has a mild to moderate case of Asperger’s syndrome, which renders him very absent-minded and almost completely incapable of organization. Stephen cannot concentrate on the usual things that are expected of him, and it frustrates him to levels that people without Asperger’s cannot grasp.

The paradigm of "get with the program" and "work by the sweat of your brow to earn your living" is meaningless to him because of the way he is “wired”, not because he doesn’t want to. However, this may be for the best.

Although Stephen is not studious in the traditional sense, he has found an interest in electronic music and he has taught himself to use some very complex digital music, recording, and audio manipulation software. In a very short period of time, Stephen had not only taught himself the use of the Digital Audio Workstation or DAW, but he has turned out to be a very serious composer. His music is quite sophisticated yet commercially viable. It could easily be welcome on the playlists of electronic music enthusiasts as well as the dance floor.

All of the sounds, textures, and instruments that Stephen creates are made from scratch. Stephen does not use any preset sounds nor does he use any loops. Stephen spends as much time crafting his sounds as he does composing. Having seen him producing (composing) his music, it is akin to watching a surgeon performing an operation. His fluency with the DAW is remarkable particularly given his problems with organization, but in the realm of music making, he has found his feet.

Stephen, with the help of his father, has launched an Indiegogo campaign to raise money for the professional mastering and duplication of his first record, “Couch Surfing Through Time”. Stephen is very serious about his music and his goal is to be included in the fraternity of electronic music composers and make a living at it. The goal of his Indiegogo funding is to have a professionally mastered recording in his portfolio in order to court the many music producers, labels, and companies that could launch his career.

For more information about the campaign, visit:
https://www.indiegogo.com/projects/fantastic-electro-music-composer-despite-aspergers/x/8292997

To hear the music of Stephen Weinman, visit: http://youtu.be/vzmVZoo04p0

About Stephen Weinman
Stephen is a young prodigy composer of electronic dance music who is awaiting the release of his first record. 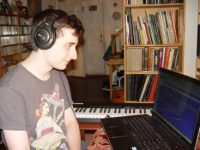