Endeavoring to provide the 1.2 million Americans diagnosed with cancer annually with alternative treatments co-authors Johanna C. Schipper and Frank J. Vanderlugt announce the launch of “The Natural Cancer Handbook”. The useful book explores how more than fifty alternative treatments work, their price, and where they can be obtained.

Kelowna, BC -- (ReleaseWire) -- 05/20/2014 --Co-authors Johanna C. Schipper and Frank J. Vanderlugt announce the launch of “The Natural Cancer Handbook” to provide relief for the 1.2 million Americans diagnosed with cancer annually. Contributing to the war on cancer with a bevy of scientific and anecdotal evidence to support the effectiveness of the treatments the handbook is a respite from the mixed messages patients often endure.

With more than fifty of the most effective alternative cancer treatments listed
The Natural Cancer Handbook is the work of two years of research. Used successfully over the last century, the remedies found in the handbook are significantly cheaper than standard cancer treatments and in most cases can be used alongside them.

Frank Vanderlugt, co-author of the book said of the natural treatments available for those with cancer, “Cancer is the second largest cause of death in America despite the war declared on it in 1971. Since then the U.S. has spent about $200 billion on cancer research yet Americans still spend approximately $107 billion dollars on cancer healthcare annually. Something’s a miss. We believe it’s time that the cancer patient has some alternatives. We’ve done our best to provide just that in the most comprehensive way we know how.”

In The Natural Cancer Handbook Schipper and Vanderlugt describe various types of cancers, traditional cancer treatments and the causes for the progressive disease. The co-authors cover an in-depth look at the most effective treatments as well as what the book describes as a “Clean Up For Your Internal Environment”. The handbook discusses the successful alternative treatments Budwig Diet, Beta 1, 3D Glucan, and the readily available green food supplements such as barley grass, chlorella and spirulina. The Natural Cancer Handbook also explores the benefits of Melatonin, Noni, Resveratrol and the Canadian Resonant Light and the Hulda Clark generators.

“The Natural Cancer Handbook” is available for purchase on CreateSpace.com at a retail price of $34.95. 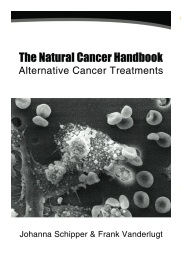