Williamsport, PA -- (ReleaseWire) -- 06/22/2017 --In today's world, terrible things like violence and hatred are incredibly common. This is not the type of world that many people want to bring their children into. To combat this growing negativity, Creative Director Alyssa Pulice and her team launched The Pet Rainbow Project.

The Pet Rainbow Project was created to teach children the values that people have long held as positive, like love, unity and friendship. It teaches that we need to respect each other's differences in order to create a happier and more connected world that will be a great place for children to grow up in.

The Pet Rainbow itself is the embodiment of the spirit of the project. It is a stuffed toy of a rainbow with a cloud at each end. Each color of the rainbow represents a different value for children to learn:

Pulice says, "Pet Rainbow is a soft touch that we need in our divided world. It's time that we accept our differences and promote a message of unity."

The clouds on either end of the rainbow are made from bean bags, enabling the toy to stand up on its own. It also incorporates an attached loop, making it easy to carry or attach to a backpack for easy portability. This way, children can share the message with everyone they encounter.

Each Pet Rainbow comes with a Core Values Booklet, which further explains the values that each color represents. The kit also includes Pet Rainbow stickers, crayons and an official Certificate of Adoption. Lastly, the Pet Rainbow comes with its own house. Children are free to color this house in any way they choose to reflect their own personality and preferences.

Aside from spreading positive messages throughout the world, The Pet Rainbow Project also intends to donate a portion of its profits to children's hospitals around the world. The creators of the project have already been in touch with several of the top hospitals in the United States and Canada, and they are excited to be a part of the project.

To bring the Pet Rainbow to the world, the creators have launched a Kickstarter crowdfunding campaign with a funding goal of $20,000. The campaign will run until July 15 and must achieve the full amount in order to receive the funding. Backers who contribute $15 or more to the campaign will receive their own Pet Rainbow once production has completed in October 2017. 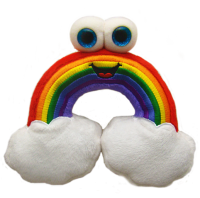