The Puzzle Based Robot Funded in 48 Hours

ActivePuzzle is a robot-building game where blocks are puzzle pieces

"Technology should be taught in a language children understand," said Meir Sela, the founder of ActivePuzzle. "I got together with a team of creative people who shared the same vision; we wanted to teach children technology using their own language, one that they learn before they even start talking... Puzzles!"

ActivePuzzle comes in the following sets:

Included are 10 ActivePuzzle Advanced Kits and a digital curriculum pack for educators.

Each puzzle piece implements a certain function: the battery piece supplies electric power to the circuit, the proximity sensor "sees" objects, the motor drives a wheel or fan, etc. ActivePuzzle robots are based on the Braitenberg Vehicle principle: input pieces trigger adjacent output pieces. For instance, when a light sensor puzzle is connected to a motor puzzle, the motor will run faster as the light on the sensor gets more intense.

ActivePuzzle is for children aged 8+ and for those with young minds who want to build robots and to learn how they work. Additionally, educators can use ActivePuzzle to teach STEM: the game is very intuitive and simple to learn, and there are a large number of scientific and technological concepts that can be taught using ActivePuzzle. One important characteristic of ActivePuzzle is its being a gender-neutral game: the puzzle language makes girls feel natural and confident, and the game activities strengthen their self-efficacy. 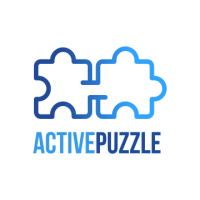 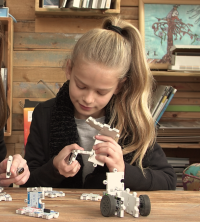