Zurich, Switzerland -- (ReleaseWire) -- 03/09/2020 --In the past month, the crypto space has not been quiet, with the barometer of public opinion turning 180 degrees. Some people believe that there is no reliable theoretical support for the safe-haven attribute of Bitcoin, and that Bitcoin is still only an investment target for speculators before it has a real landing application.

Just a few days before the Chinese New Year (mid-January), the new coronavirus epidemic broke out in Wuhan and continues to this day. The virus, which appears to be rampant only in China, is quietly developing and eventually spreading across the globe. Before the outbreak, the Bitcoin market had been on the rise, peaking at $10,500, on news that Bitcoin will be halved in May this year. The digital asset market finally took a hit after the new pneumonia epidemic became so severe that the government called for people to be quarantined at home for two weeks, reduce social activities and ordered businesses not to return to work until February 10 after the lunar New Year holiday. Bitcoin fell back on February 13. But after a couple of days, it continued to rise steadily until it finally fell sharply on February 24 (the price of Bitcoin peaked at $9,988), dropping as low as $8,444, before slowly recovering on March 1 and now trading at around $9,040 (as of press time).

We can pay a bit attention to these two dates – February 13 and February 24.

As of February 13, Bitcoin was still on the rise, with many investors tasting the sweetness and affirming its status as a safe haven for money. In the view of many investors, the epidemic, while not to be taken lightly for the time being, is unlikely to develop into a long-term situation under the strict control of China.

When the lunar New Year holiday came to an end, after China's call to return to work on February 10, there was no turning back from the new pneumonia epidemic. Most companies have not been able to return to full production because many of the workers who returned home were shut down by high-speed trains, worried about taking public transport or unwilling to return to work before the epidemic is fully over. The cost of staff is heavy, and the cost of rent is even worse. Xibei Youmian village, a well-known Chinese restaurant brand, claims that even the loan will only cover three months of labor wages. In this case, the liquidity of the funds declined. The crypto market fell on February 13, which we can temporarily attribute to the impact of the new pneumonia epidemic in China.

Until February 23, countries outside China and the World Health Organization (WHO) were on alert for the new pneumonia epidemic.

On February 23, South Korean President Moon Jae-in raised the alert level for the new pneumonia epidemic from the current "alert" level to the highest "severe" level.

On February 29th Washington Governor Jay Inslee declared a state of emergency after the state's first death from pneumonia.

Then it turned into a global disaster. There are cluster outbreaks in many countries:

The situation of the epidemic in the world

In the last week of February 2020, several major global stock markets had their worst performance since the 2008 financial crisis. Meanwhile, gold rose to 1689.3 USD per ounce on February 24, its highest level in the past 12 months.

Gold prices tend to rise in times of economic uncertainty or global turmoil, and because of its limited supply, it is known as a safe haven asset in times of crisis. Bitcoin is considered the digital version of gold, which shares many of the same attributes as gold, such as overall scarcity.

Gold has been a favorite for most of man's existence. Gold was one of the earliest forms of money and one of the earliest forms of tradable assets, and even today it is often traded in financial markets. Because of its long history and familiarity -- everyone knows what gold is, what it's used for, even its value -- it's a favorite of baby boomers. While millennial investors may see the benefits of Bitcoin, it is baby boomers who control most of the wealth in today's world that are driving the flow of capital from stocks to gold.

This is an indispensable part in the development of Bitcoin -- competing with the most commonly recognized investment targets in the traditional sense. In the event of a global economic downturn, funds will actively flow to the most favored and most widely recognized assets to achieve the purpose of hedging funds.

It was the first time Bitcoin and gold had faced each other, and it lost, but not very badly. On March 1, the Bitcoin held the $8,500 pressure level and rose positively, giving digital currency holders a lot of confidence.

The continued rollout of leverage/contract services by exchanges is also a testament to the crypto market's clarity.

And ZB.com, which only offers 3x leverage trading in the past, also launched 10x leverage limit at the beginning of this year. Now it has support USDT/QC trading pairs. And more trading pairs will be coming soon.

This "black swan" event also gave digital currency investors a warning. Even if there is a "havled event" and deep consensus, we should never be too positive on the market. Cryptocurrency markets are more volatile than traditional financial markets. The stock market is backed by the state, and gold is backed by the generation that holds the most wealth. But with each test Bitcoin goes through, the more likely it is to become the future. When Bitcoin is in the global spotlight, early digital currency investors will be rewarded. 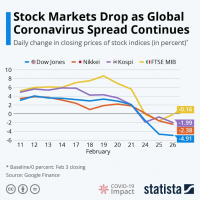