The Satanic Temple will open its doors to the public on September 23rd, 2016 at its Salem, MA headquarters, which also serve as an art gallery/witch-hunt museum

Salem, MA -- (ReleaseWire) -- 09/14/2016 --The Satanic Temple (TST) is announcing the opening of its international headquarters in Salem, MA on September 23rd, 2016. The headquarters resides at 64 Bridge Street in an old Victorian house built in 1882 that was once used as a funeral home. TST headquarters will also house the seven-and-a-half foot tall bronze statue of Baphomet until an offer to donate the statue to Arkansas for display on State Capitol grounds alongside the Ten Commandments is accepted.

According to TST spokesperson Lucien Greaves, "Salem emerged as an obvious choice to be established as the base for our operations. In addition to Salem's history and proximity to the intellectual hub of Boston, the people we have spoken to have been incredible friendly and supportive. Salem is quaint, and quite lovely, and we intend to contribute to the cultural climate while maintaining the community's high standards. The irony that a town which one executed people because of alleged ties to Satan will now be hosting the headquarters of the world's largest satanic organization is not lost on us. The fact that we have a home in Salem is a testament to the progressive mentality of the people there, and the local government's support for plurality."

In addition to displaying the one-and-a-half ton statue of Baphomet, TST will open the property to the public as the Salem Art Gallery - a gallery with a permanent exhibition dedicated to "Satanic Panic" witch-hunts past and present. The space will also host a media room where the organization plans to hold regular lectures, film screenings, educational seminars, and other events.

The TST/Salem Art Gallery opening will feature Baphomet's sculptor, Mark Porter, who will also present limited edition photographs. In addition, Chris P. Andres will be exhibiting his armature sculptures of Baphomet based on Eliphas Levi's design.

About The Satanic Temple
The mission of The Satanic Temple is to encourage benevolence and empathy among all people, reject tyrannical authority, advocate practical common sense and justice, and be directed by the human conscience to undertake noble pursuits guided by the individual will. Civic-minded, The Satanic Temple has been involved in a number of good works including taking a stand against the controversial and extremist Westboro Baptist Church.

For more information about The Satanic Temple, please visit http://www.thesatanictemple.com. 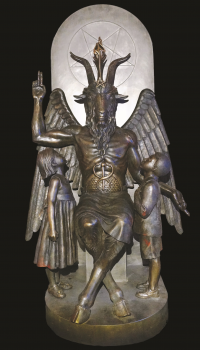