The Satanic Temple has submitted plans for a monument featuring a seated Satan, whose lap serves as a chair for visitors to Oklahoma City

New York, NY -- (ReleaseWire) -- 01/06/2014 --Following up on its offer to donate a monument for placement on the Oklahoma City Capitol grounds, The Satanic Temple has formally submitted its Request for Approval of Architectural Modifications application along with an artist’s rendering for consideration.

In late November, The Satanic Temple wrote to the Oklahoma City Capitol Preservation Commission expressing their desire to donate a monument “to complement and contrast the Ten Commandments monument that already resides on the North side of Oklahoma City’s Capitol Building.”

“The monument has been designed to reflect the views of Satanists in Oklahoma City and beyond. The statue will serve as a beacon calling for compassion and empathy among all living creatures. The statue will also have a functional purpose as a chair where people of all ages may sit on the lap of Satan for inspiration and contemplation.”

The proposed monument features a 7 foot tall goat-headed Baphomet that sits cross-legged flanked by a smiling child on both sides. The lap will serve as a seat for visitors.

Inscribed on the front of the statue above an inverted pentagram will be one of the Satanic Temple’s fundamental tenets that proclaims: “The spirit of compassion, wisdom, and justice should always prevail over the written or spoken word." The back of the stone slab will display a passage from Lord Byron’s dramatic work, Cain that reads:

Then who was the Demon? He
Who would not let ye live, or he who would
Have made ye live forever, in the joy
And power of Knowledge?

Another quote from William Blake states: “Prisons are built with stones of Law, Brothels with bricks of Religion.”

According to Lucien Greaves, “Our monument celebrates an unwavering respect for the Constitutional values of religious freedom and free expression. Satanism is a fundamental component at the genesis of American liberty. Medieval witch-hunts taught us to adopt presumption of innocence, secular law, and a more substantive burden of proof. Today, we are rightly offended by the notion of blasphemy laws and divine fiats. Acknowledging wrongful persecutions has helped shape the legal system that preserves the sovereignty of our skeptics, heretics, and the misunderstood. It has shaped a proud culture of tolerance and free inquiry. This is to be a historical marker commemorating the scapegoats, the marginalized, the demonized minority, and the unjustly outcast.”

In addition to the statue’s spiritual purpose, Greaves also noted: “We trust that this unique monument will also prove a favorite tourist attraction to Oklahoma’s Capitol for years to come.”

A fundraising campaign on indiegogo has been set up to help pay for the monument.

About The Satanic Temple
The mission of The Satanic Temple is to encourage benevolence and empathy among all people, advocate practical common sense and justice, and be directed by the human conscience to undertake noble pursuits guided by the individual will. Civic-minded and a believer in universal acceptance, The Satanic Temple has been involved in a number of good works, including taking a stand against the controversial and extremist Westboro Baptist Church. Additionally, the temple has worked to raise funds to participate in the Adopt-A-Highway program so as to keep New York City highways clean and protect the environment. For more information about The Satanic Temple, please visit: www.TheSatanicTemple.org 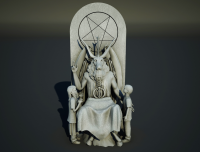