An entertaining sci-fi comedy film The Search for Simon is created by the multi award winning director Martin Gooch, who is also famous for his After Death movie. There is much to be seen in this film, from alien abduction and obsession, to loss and love. The USA Official Premiere of this film will take place on Saturday, February 15th, at 7 p.m. at the Boston Sci-Fi Film Festival.

Boston, MA -- (ReleaseWire) -- 02/12/2014 --The Search for Simon is a sci-fi comedy about a man who puts all his efforts to find his brother Simon. He is convinced that his younger brother was abducted by aliens in 1979 when David was 10 years old. He spends his life trying to find him.

For this British comedy science fiction feature film, SCI-FI-LONDON worked in close partnership with Martin Gooch, an award winning film director. A golden cast was selected to match the film script, featuring Tom Price in the role of Torchwood, Carol Cleveland in the role of Monty Python, Lucy Clements in the role of ABC of DEATH, Sophie Aldred in the role of Dr. Who, Chase Masterson (Star Trek Deep space 9), Hitchhikers Guide to the Galaxy is played by Simon Jones, while the legend Ian Livingstone appears as a guest, who brought Games Workshop, which helps him unleash Tomb Raider.

In addition, this British movie is perfect for all beginning film makers, who want to learn how to write and make movies. They can learn from Martin Gooch, who is an experienced and highly organized director and has a fantastic eye for a story. His great understanding of shooting has attracted many fans to the 13 feature films he contributed to, including The Muppets, Judge Dredd and Harry Potter. Additionally, he worked for more than 200 TV programs, like Robot Wars, Big Brother, Hollyoaks, Eastenders, etc. His feature film, Death, brought him 8 awards at different festivals. Among the prizes he received,are two Best Director awards.

The US Premier of The Search for Simon can be seen at the Boston Science-Fiction Film Festival on Saturday, February 15th, at 7 p.m. This festival is a 10 day film event devoted to presenting short and science fiction feature films. Many new, classic and schlock films are presented during the 24 hour movie marathon, also known as The ‘Thon’. The Boston Science-Fiction Film Festival is an annual event that occurs in the Greater Boston area every February.

Everyone, who would like to watch the US Premiere of The Search for Simon is welcomed to attend the Boston Science-Fiction Film Festival on February 15th, 7 p.m., where spectators will have the opportunity to meet Louis Savy, London Sci-Fi Film Festival director and Martin Gooch, the film director, after the screening.

About Martin Gooch
Martin Gooch (http://www.martingooch.com), started work in the VFX Department on Judge Dredd. Since then,Gooch has worked on more than 200 productions from Harry Potter to East Enders and Robot Wars to Big Brother. He has filmed all over the world, from Sahara to swamp to Shepherd's Bush. He’s been to see things, talked to them, filmed them and written about them.

Gooch is the only person in the world to have been a winner with BBC Talent two years running. He has made about 20 short film things give or take a few, but he can't quite remember. Many of these short films have been screened at festivals across the globe. Gooch directed the BAFTA winning and EMMY Nominated Spooks interactive (BBC/Kudos) and has directed Doctors (BBC1) and Hollyoaks (C4). He has a Masters degree in screenwriting form LCC – The university of the Arts and has written fourteen feature films – one a year, every year. 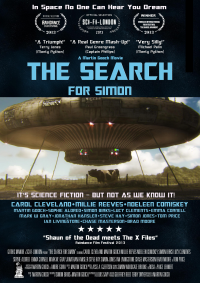