The Team of Marathi Film, 'Mulshi Pattern' Talks About "Art and Production" at Times & Trends Academy

Pune, India -- (ReleaseWire) -- 12/23/2018 --A session on the topic, "Art and Production" was conducted by an eminent Cinematographer, Mr. Mahesh Limaye, along with the team of Marathi film, 'Mulshi Pattern' at Times & Trends Academy on 24th November 2018, Saturday. The session was blessed with the presence of Marathi actor and director of the film, Mr. Pravin Tarde. Along with him notable personas such as Abhijeet Bhosale, Ramesh Pardeshi, Kiran Dagade, actress Malvika Gaikwad, and Devendra Gaikwad at Times & Trends Academy at the Kothrud Branch in Pune. This session was specially organized by the Academy for their Interior Design and Fashion Design students as part of their Reverse Innovation Course.

Reverse Innovation is the only way to bridge the massive gap in the current Indian Education System. Every year, thousands of students graduate from colleges/institutions with dreams and hope in their eyes for a secure future. But once they leave college, most of them get a reality check; they are in shock over the job reality. Others realize that they truly aren't even ready to face the competition. But if not through the education system, then how else are the students supposed to be prepared. To address this massive gap in the education system and to make students market ready, the pioneer in vocational education, Times & Trends Academy has introduced 10 weeks comprehensive Reverse Innovation Programs for Interior & Fashion Design students.

In the session, the cinematographer of the film, Mr. Mahesh Limaye talked about the importance of observation while being in a career such as cinematography and further into film production. Many important topics such as the application of 3d Animation & VFX in current movies and how to use layering in the post-production process, Tips and tricks of set designing were some of the highlighted topics of the session. The students were thrilled to hear about such informative concepts by these professionals.

"Students need to invest their time properly. Time is money for students," says Mr. Mahesh Limaye. A student will not have money at the present situation, but you need to invest your time in the right things to be successful. Mahesh Limaye is a hard working cinematographer who has worked for movies such as Freaky Ali (2016), Yellow (2014), Dabangg (2010), Fearless (2010), Natarang (2010) Fashion (2008), to name a few. He has been interacting with the TTA students since quite some time. With the sessions like these, Times & Trends Academy wants to bridge the knowledge gap between Industry professionals and students.

The Director of the film, Mr. Pravin Tarde talked about his acting career which started from the theatre with renowned actors such as Naseeruddin Shah, Paresh Rawal to name a few. After his acting career, he gradually had an interest in direction. "The film, Mulshi Pattern is very close to my heart", he says. The film which was released on 23rd November 2018, portrays realistic hardships faced by farmers and tackles one of the ranging issues of our times.

After attending the session held on Saturday, Times & Trends Academy's Interior design student, Ms. Hetal Malviya said, "I am so happy that I attended the session. I got to meet all the celebrities and had interaction about the art and production process required for the films. It was a once in a lifetime opportunity."

Another student of Fashion Design course, Ms. Shreya Agrawal said, "I am thankful of Times & Trends Academy for giving us the opportunity to interact and meet such amazing celebrities. I liked how the celebrities shared their life experiences and talked about the career path which leads to the film industry. I learned a lot!" 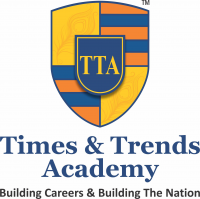