The Unexpected Journeys of Lawrence Tyrone Is a Quixotic, Inspiring Misadventure with an Eccentric Assortment of Characters

The highly anticipated release of The Unexpected Journeys of Lawrence Tyrone arrives March 26, 2019.

Toronto, ON -- (ReleaseWire) -- 03/27/2019 --The novel, The Unexpected Journeys of Lawrence Tyrone, introduces Tyrone, a professor of law with a drinking problem who is still obsessed with his ex-wife, and when he finds out his brother is about to marry her, he wants to ruin the wedding. When crashing the wedding with disastrous results leaves him divorced for a second time, unemployed and close to rock bottom, Tyrone moves to the country, buys a Harley and starts taking riding lessons.

Isolated out in the country, far from his usual haunts and routines, Tyrone gets caught up in the lives of several unpredictable characters—his neighbors and their Labrador dog (who has a mind of her own), his street-smart riding instructor, a rebellious young girl, a gambler and a medical resident caught in a love triangle.

Tyrone is an entitled, not well-liked man who is entirely unaware of his surroundings. Throughout the novel, he begins to realize that his meddling in other people's lives forces him to confront his own failings and to accept life's journey without trying to control everything. Tyrone begins to reassess himself and wants to be a different man, but there's the lifetime of bad habits and bad behaviors to overcome…

"A must read novel - couldn't put the book down! AK Blackman's first book, The Unexpected Journeys of Lawrence Tyrone, doesn't disappoint, and kept me guessing just how much trouble Tyrone would get into before wanting to be a man of his word." 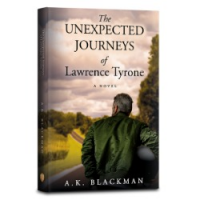