The U.S. Company Behind the Research & Development-Based Skincare Company, KLARIF, Inc Is Preparing for a Stock Market Listing

New York, NY -- (ReleaseWire) -- 11/08/2013 --The U.S. Company behind the Research & Development based Skincare Company, KLARIF, Inc is Preparing for a Stock Market Listing.

According to IR division, KLARIF, Inc plans to list on the OTC Bulletin Board followed by NASDAQ Global Select market. The IPO is reported to be worth roughly $1.5 billion.

KLARIF Inc., a research & development based skincare company, had recently filed for a registered trademark for its proprietary compounded formulation Ma²T™ (Maat: Mitochondrial Activator Adenosine Triphosphate) as the core set of ingredients in the KLARIF skincare lines.

Ma²T™, pronounced as \mat\, was created through an exclusive fermentation and enzyme extraction method developed by KLARIF Research & Development division. It is a ferment extract compound formulation from algae, fruits, seeds, red ginseng and clinically proven botanical plants with potent antioxidants, such as catechins from green tea, anthocyanins from dark berries and red cabbage, bioflavonoids from citrus, carotenoids like lycopene and lutein from tomatoes, resveratrol from red wine and genistein from soy. The KLARIF’s ‘Authentique 3 Step Care’, which is loaded with Ma²T™, works at the cellular level to revitalize collagen and elastin synthesis to help reduce wrinkles and improve skin texture for a brighter complexion.

The KLARIF skincare line has been complimented by singers, actresses, beauty bloggers, fashion and beauty editors, and A list celebrity makeup artists for helping their skin all alike. In the last few months, celebrities like Sabi, Ciera Parrack, Rita Ora, Jackson Guthy, Madeleine Mantock, Gabrielle Giguere and Jaime Pressly have all used KLARIF before and after makeup in their skincare routine.

Vanity Fair’s West Coast Editor Krista Smith praised, “Klarif, Great skincare!” and Emmy Award Actress, Jaime Pressly said, “Klarif skin care helps with the discoloration we get from those awesome hormones we all have to deal with. Ha! I have been using it for 4 weeks and it works!!! The Klarif serums have actually faded my spots by half in the last 4 weeks and it leaves your skin dewy and sexy!”

Beauty blogger and beauty editor Chantal Moore shared, “"I have been using Klarif Authentique 3 Step Care on both women and men. We all notice transformed skin texture and immediate firming of the skin, making it a perfect platform for makeup application,” on her blog.

Celebrity makeup artist Su Han said, “I have given away all the skincare products that were sent to me before because Klarif is all I would ever use now. Not just on myself but I used it on all my clients on shoots including Harry Connick Jr., Dev Patel, Constance Marie, Juliette Lewis and Rita Ora. Do I dare say... the holy grail!"

Corporate is working to expand the distribution of KLARIF skincare lines to upscale department stores throughout the US, and in early 2014, into Europe & Asia.

KLARIF’s ‘Authentique 3 Step Care’ consists of the Concentrated Efficiency Essence, the Hydrating Emulsion, and the Soothing Repair Cream, which are available through klarif.com or by calling 8-KLARIF-BEST.

About KLARIF
KLARIF® and Ma²T™ are registered trademarks for KLARIF, Inc. The KLARIF ‘Authentique’ Skin Care regimen is made from algae, fruits, seeds, red ginseng and clinically proven botanical plants with potent antioxidants. 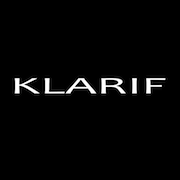