The Walking Drunk Will Soon Launch on Kickstarter

A Kickstarter campaign to be launched for a new strategic party card game that is designed to bring friends together.

Kleve, Germany -- (ReleaseWire) -- 01/20/2016 --In order to help offset some of the costs associated with production and development, the team behind the new interactive card game entitled 'The Walking Drunk' are launching a Kickstarter crowdfunding campaign.

According to the creators, The Walking Drunk is a social-interactive card game that combines the best features of a drinking game and a board game. It is a creative game with strategy but is designed to get players laughing by including a variety of non-drinking and drinking-related activities. The Walking Drunk provides approximately 2 hours of game time for 3-8 players.

At the beginning of the game, each player chooses one of the creative roles, each of which has its own function in the game and is dealt five money cards, which are called Ultrabax. The player who collects the most Ultrabax by the end of the money deck, wins. Money can be collected by performing tasks found in the main deck, which include embarrassing questions, non-drinking and drinking challenges. It can also be stolen by the game thief or lost due to unexpected expenses.

"We were dedicated to making a card game that was as strategic as a popular board game but as hilarious as a drinking game." explains Valentin Turbin, the creator of The Walking Drunk. "There is simply nothing like getting your friends around a table and having fun by trying to destroy one another in a game."

Even before the Kickstarter campaign was released, The Walking Drunk received great reception from the public online. The game creators believe that they will reach their campaign goal of €10,000 before the end of their project.

There are several rewards available for individuals who choose to donate towards the game. For instance, anyone donating over €18 will receive The Walking Drunk 300-piece card deck and anyone donating over €45 will receive the card deck along with a special edition t-shirt. Donations over €150 are eligible to receive a standard card deck including a personally designed animated character.

The launch date of the campaign is expected to be on February 9th. To make a donation, learn more about the rewards and find out more information about The Walking Drunk, visit their Kickstarter Campaign directly. 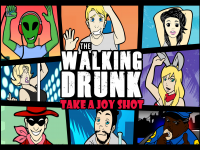