Henderson, NV -- (ReleaseWire) -- 02/07/2017 --Global Genesis Group is excited to announce their acquisition of the martial arts action adventure THE WOMAN IN THE RED DRESS, directed by Calvert David Miles. The feature was recently acquired for worldwide distribution by USA based Global Genesis Group LLC, with the Berlin Film Festival being its debut film market. With the heartfelt desperation of TAKEN and the revenge of JOHN WICK, THE WOMAN IN THE RED DRESS is an adrenaline rush of action. In the movie, art imitates life in Chicago, a city filled with blood and violence as a MMA fighter names Riley falls in love with a beautiful woman, and Caesar, an evil man kills her out of anger. Riley goes on a vengeful manhunt of Caesar. Their hatred and their need for retribution is intertwined in a violent climax.

The director Calvert David Miles, was inspired by action films as he grew up, and he wrote this movie as a homage to the modern day revenge pic. Director Miles stated, "As a young boy, I dreamt of becoming a filmmaker. How blessed I was to be able to put this movie together. Not only was making the movie a dream come true, it was a blast, and I couldn't have picked a better cast of actors to bring my characters to life. The idea for this film came from a combination of DRIVE and FLASHDANCE, adding in some flavor from '90s action movies, and the final product is something we can all enjoy watching."

Director Miles further commented on the film's upcoming release, "I am extremely happy to have found Global Genesis Group, and since we signed, working with them as distributors and fellow filmmakers has been the best experience. I am really fortunate that this company picked my movie to be acquired for worldwide distribution."

Charles Morris Jr., V.P. of Development and Acquisitions for Global Genesis Group, stated, "We met Cal at our room in at the American Film Market, and the moment we saw a trailer of his movie, we knew he was a very talented director, and we wanted to be in business with him. THE WOMAN IN THE RED DRESS not only has great martial arts fights, but it has heart, and the characters have depth. These are the kinds of genre projects that inspire Global Genesis Group to get involved. We want our creators and producers to tell great stories, and to get the audience on the edge of their seat, rooting for the hero. THE WOMAN IN THE RED DRESS delivers all those sentiments." 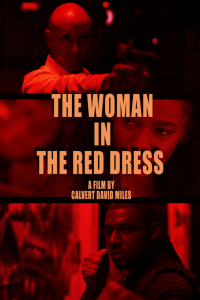