"Amid FOSTA crackdown, we are confident enough that 3rder will replace Craigslist personals sections and also be a successful Tinder alternative for threesomes. It will always adhere to the original goal and provide users with the best platform to achieve their fantasies about threesomes" Justin R. concluded. 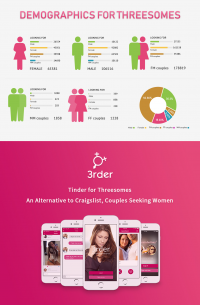