Thriller, the White Rose, to Start Filming in Dallas This Summer

Dallas, TX -- (ReleaseWire) -- 04/26/2016 --The plan to make a thriller starring Los Angeles actor Brando Eaton from films such as Clint Eastwood's American Sniper, is currently appearing on Indiegogo. The Indie film is being featured on the Crowdfunding platform, providing fans with a chance to be part of the film-making process, or to obtain a unique souvenir pre-production.

The White Rose is about three college journalism students, Frank, Beth, and Peter, who discover the United States government are spying on ordinary American citizens. Following a split within the group of friends, a whistleblower releases classified documents showing that the U.S. government has been collecting emails, texts, and contents of phone calls from American citizens. Frank, played by Eaton (Alvin and The Chipmunks: The Squeakquel, Woodlawn, Balls Out: Gary the Tennis Coach) decides to test the extent of the government's spying. He texts provocative words to his friends, like 'bomb' and blow-up.' The results of his actions, which unfold during the short film, have severe consequences for himself, Beth, and Peter.

Eaton has made numerous TV appearances including Nickelodeon's Zoey 101, MTV's Awkward, and ABC's The Secret Life of the American Teenager. He was nominated for the Outstanding Performance by an Ensemble in a Drama Series award for his role as Jonah Mitchell in Showtime's Dexter in 2010. He appears alongside Amanda Erickson as Beth (Dallas, NCIS: New Orleans, I Saw the Light), and Reinaldo Zavarce as Peter. Award-winning Venezuelan actor and singer, Reinaldo Zavarce's appearances include Don Quixote: The Ingenious Gentleman of La Mancha with James Franco, Nickelodeon's 11-11: En mi Cuadra Nada Cuadra, Isa TKM, and he has been the host of the Nickelodeon Kids Choice Awards with Will Smith.

About The White Rose
Called The White Rose, the film is named after a real group of students from the University of Munich, Germany, who used a printing press to spread criticism of the Nazi regime in the early 1940s. Frank, Beth, and Peter, learn about The White Rose students from their lecturer Professor Albett, who is played by Barry Corbin (Urban Cowboy with John Travolta, Stir Crazy, War Games, The Best Little Whorehouse in Texas, Lonesome Dove, No Country for Old Men). Corbin has also appeared in CBS's Northern Exposure as astronaut Maurice J. Minnifield, One Tree Hill, Anger Management, and Modern Family, and is currently filming Netflix's The Ranch with Ashton Kutcher, Debra Winger, and Sam Elliott.

Plans are being made to start filming this summer in the Dallas/Fort Worth area, with the goal being to get the film into international film festivals. ''We have some great locations for The White Rose that will really help make it look fantastic - including a college campus that we need to hire for four days,'' said Writer, Director, and Executive Producer Scot Michael Walker.

Fans that offer their support on Indiegogo are entitled to an exciting range of perks and the chance to become involved with the production of The White Rose. 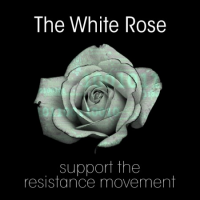