Tom Sizemore to Scare Audience Behind "The Door"

Los Angeles, CA -- (ReleaseWire) -- 08/11/2017 --Global Genesis Group is proud to announce that award-winning actor and Golden Globe Nominee Tom Sizemore (Saving Private Ryan, Black Hawk Down, Heat) has committed to star in the horror/thriller feature film THE DOOR which is scheduled to start production in the fall of 2017. Global Genesis Group recently produced the horror film Escape Room starring Skeet Ulrich which is scheduled to be released on Martin Luther King Day 2018. Global Genesis Group is producing The Door as well as the acting as the worldwide distributor of the feature.

THE DOOR is a psychological thriller in the vein of INSIDIOUS. In the late '50s, Dr. Lazarus Saint was conducting horrific experiments until a suspicious house fire killed Dr. Saint and his young son Vincent. In present day, Scott and Rebecca Johnson move into the old Saint house. When people who visit the house start dying, Rebecca discovers the ghost of Vincent who warns her that Scott is becoming the dead Lazarus. Rebecca realizes she is doomed unless she can stop the reborn Lazarus. Tom Sizemore will play the challenging role of Scott Johnson.

Tom Sizemore stated, "I was told about the project THE DOOR while I was on location in Mexico. Once I received the script, I was immediately immersed in the intrigue and by the depth of the characters. I'm very excited to be a part of this project. It's not only incredibly scary but delves into the battle between good and evil.

Charles Morris Jr, Vice-President of Acquisitions and Development for Global Genesis Group, stated, "We are extremely excited that Tom Sizemore agreed to bring his amazing acting talent to The Door. We couldn't think of a better actor than Tom Sizemore to reveal the anguish in the spiritual struggle of good and evil." 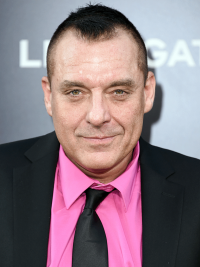