"Torture Room" with Barry Ratcliffe, John Forgeham ("Kiss of the Dragon"), and Lena Bookall is more than a slasher with a shocking current events angle, a great re-release pick for Halloween.

Los Angeles, CA -- (ReleaseWire) -- 10/30/2014 --This Halloween season is marked by the re-release of “Torture Room,” a thriller drawn from what is possible in America during the modern age of fear of terrorism, suspicion, and far reaching government powers.

Barry Ratcliffe, best known as City Councilman Jason Tyler on "Army Wives," is a not so nice Homeland security agent whose job is to brainwash a naive and innocent young American woman who has a history of Arab boyfriends. She is targeted by homeland security, accosted, dragged in for questioning, and held as a prisoner in a secret facility where she is tortured and brainwashed, all under the jurisdiction of the Patriot Act.

Based on the actions of the US government during these uncertain times, this film is truly frightening. Barry stars alongside John Forgeham from "Kiss of the Dragon" with Jet Li and Bridget Fonda, and Lena Bookall, one of the most talented actors in Hollywood. Her torture scenes are so realistic they are hard to watch in one sitting. Her choking scene(https://www.youtube.com/watch?v=rkX9bgSNZJ4) is so realistic that it has over 30,000 views on YouTube.

"Lena is an amazing actress" states Ratcliffe. "She is pure talent, seamless, and in the moment beyond the average. I love to watch her work. To be in the same space during her performance is truly a gift and spiritual sharing that is rare in this business, but always our goal," Ratcliffe said.

"Torture Room" is a true thriller, and a thinking man's fright for Halloween.

About Barry Ratcliffe
Barry Ratcliffe is best known as city councilman Jason Tyler on the Lifetime drama “Army Wives”, and as an auctioneer on all 3 networks and the upcoming Nicholas Sparks film “The Longest Ride” His wide range of characters span from comedy to drama on such shows as “Nashville”, “Person of Interest”, Tyler Perry’s “The Haves and The Have Nots”, “White Collar”, “Brothers and Sisters”, the award winning “House of Cards” and many more. His film resume is equally extensive and varied from his latest “Loomis Fargo” with Zach Galifianakis and Owen Wilson, to recreating the cowardly lion role in the feature film “Dorothy and the Witches of Oz”. His full resume can be viewed on IMDB at http://www.imdb.me/barryratcliffe. Ratcliffe is represented by Monarch Talent, Agency Connects, and Castle Hill. 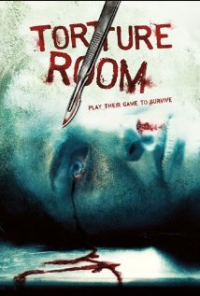