Dorking, Surrey -- (ReleaseWire) --11/22/2011 --TouchAbility, one of the UK’s leading retailers of touch screen gloves, has launched a new range of touchscreen compatible gloves, which feature special conductive fibres in all 10 fingers.

Touchscreen gadgets have become increasingly popular in recent years, thanks in part to the intuitive user interface and ease of use that characterise devices like the iPhone and Android smartphones. However, as many people are now discovering, the capacitive touch screens found on many popular mobile phones, MP3 players and GPS devices do not work when the user is wearing gloves. This is due to the way in which these devices use an electrical charge to measure the point of contact on the screen. Touching the display with a finger causes a disturbance in the electrostatic field, and this change is measured by sensors behind or around the screen which can then identify the touch location. However, most gloves are made of a material that acts as an electrical insulator, and therefore inhibits this effect.

TouchAbility gloves are now here to solve this modern day problem. They feature genuine silver thread incorporated into all 10 fingers. As silver is the best electrical conductor of all known metals, this allows the electrical impulses from the wearers fingers to be passed through the gloves, and onto the touch screen. Thanks to the unique way the gloves are manufactured, this thread is barely visible, unlike many other types of touchscreen glove that have distinct pads of conductive material or contrasting coloured sections on the tips of one or two fingers. Therefore, TouchAbility gloves look much more like a regular pair of gloves, and you can use any finger you like to interact with a touchscreen device. This means that you are able to use the full range of gestures recognised by many of the latest smartphones and tablet computers, including multi-touch gestures that require two, three or even four fingers to perform, without taking your gloves off!

TouchAbility gloves are made of a soft and stretchy material for superior comfort and warmth, and work with all capacitive touchscreen devices, including the iPhone, iPad, HTC, LG and Samsung smartphones and tablets. They are available exclusively at the TouchAbility online store (http://www.touchscreengloves.co.uk) for £12.99, and come in 2 colours – grey and charcoal, and 2 sizes – medium and large. 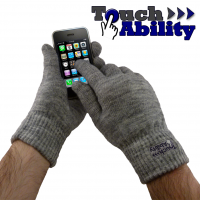