Chicago, IL -- (ReleaseWire) -- 07/19/2017 --Popular Trading Races party game creator Kenyatta Forbes just launched a crowdfunding campaign on Kickstarter to support her new card game Trading Rappers. Designed for RAP culture, this game would allow RAP fans to take their love for favorite hip hop artists to another level. Think you know who the best rap artist of the year is? Do you know which hip hop star is the G.O.A.T?

The crowdfunding campaign launched on July 13 and is geared to raise $10,000 by August 11.

Creator Kenyatta states, "It's for all the die-hard RAP fans out there and for anybody who is interested in the hip hop culture. We know how fans are always having debates on who is the greatest RAPPPER is or which one is just a trash. Thus, came Trading Rappers. It's a lit playing card game on RAP culture that promises hours of endless fun with your homies. However, such a project demands financial backup and hence this crowdfunding campaign."

The game follows simple card rules and anybody can play it. A dealer would be chosen randomly who will deal five cards to every player. The one at the left of the dealer would lead. The round will move clockwise where each player would pick a card from his hand which features a better artist. The best rapper would be chosen on the basis common consensus of all the players. The one with winning card would win the round. If a player gets a Wild Card he will have this special power to pick ANY person whom he would want to represent the card. A cool host of rewards are waiting for the backers. These include the TR deck and/or a combo of the TR deck over 17 expansion packs.

To show your support for Trading Rappers, visit:
https://www.kickstarter.com/projects/1004093005/trading-rappers?token=fbe67420 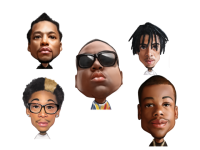