Panel Discussion "HIV/AIDS and Latin@s: Dancing from Tradition to Prevention"

Brooklyn, NY -- (ReleaseWire) -- 10/11/2011 --For the second consecutive year, Transdiaspora Network (TDN) is commemorating the National Latino AIDS Awareness Day (NLAAD) on Thursday October 13th, 2011, 7:30pm, at Columbia University School of Social Work (CUSSW). Intending to proactively engage social work students and the academia as well as community residents and social service professionals, this leading non-profit organization has put together a panel discussion “HIV/AIDS and Latinos: Dancing from Tradition to Prevention” in partnership with CUSSW's Latino Caucus. The panel will explore how the Latino cultural tradition influences HIV/AIDS prevention campaigns (and viceversa). There will be also references to the Congressional Briefing that took place in Capitol Hill, Washington DC, last September.

While Latinos/Hispanics in the U.S. represent only 16% (U.S. Census Bureau) of the population, they make up 20% of new HIV infections in 2009 according to the Centers for Disease Control. Hispanic/Latino men are newly infected with HIV at a rate three times that of white men. Among women, Hispanic/Latino women are newly infected by HIV at a rate four times that of white women.

NLAAD was created in 2003 in response to the devastating impact of the HIV/AIDS epidemic on Hispanic/Latino Communities across the US and territories. October 15th, marks the ninth annual commemoration of NLAAD, which is held each year in commemoration of the last day of Hispanic Heritage Month.

As our Communication Associate Federica Rangel says, “our main message, promoting HIV prevention awareness, has reached new places, extending beyond our initial aim (…) we raised our bar, and we will continue to work hard and challenge ourselves in the fight against HIV/AIDS, and to reach more and more young people on a larger scale.”

The night will be honored with high-profile panelists such as Melissa Faith Ramirez, Director of the NLAAD Network from the Latino Commission on AIDS, and Johnny Guaylupo, Housing Works’ LGBT Program Coordinator. Other panel members are Dominique Dupont-Dubois, Program Manager from Transdiaspora Network, and a CUSSW Latino Caucus representative.

Marilucy Lopes, Transdiaspora Network’s Communication Coordinator will serve as a moderator, along with a CUSSW Latino Caucus representative.

Free food will be provided from the tasty Latin-American/Caribbean cuisine!!!! 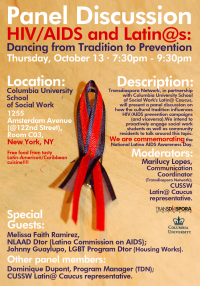