Montreal, QC -- (ReleaseWire) -- 08/04/2017 --A group of Canadians is launching a campaign for their boldly titled party game, "Triggers: A Game of Discussions" this summer on Kickstarter. The card game aims to stimulate conversation around controversial subject matter such as gender identity, gun control, safe spaces and trigger warnings. While it may come off as Monopoly's newest competition in ruining friendships, the motivation behind the game is quite the opposite.

Led by two Montreal brothers, Richard and Daniel Lajoie, the group created Triggers as a way to get people to discuss polarizing issues face to face, which they believe is a powerful alternative to arguing on social media. "There is an appetite for meaningful discussion right now. Social media is failing us. Discussions go south so quickly that a lot of people don't bother anymore." Said Daniel Lajoie. "By sitting down face to face and talking about pertinent issues, people discover common ground and gain new perspectives. Our game also removes a lot of pressure by bringing up the topics so you don't have to."

Their biggest challenge was to take their idea and turn it into a fun game. To this end, Triggers employs a unique game dynamic. Where a lot of modern party games ask players to combine two or more cards to create the most shocking punchline, Triggers asks players to predict how others will vote on difficult questions. Players vote secretly on questions like "Is it ok to punch a Nazi?", "Pineapple on pizza?" or "Are humans responsible for climate change?". One player then tries to win a point by accurately predicting how the majority of the room voted. Votes are then revealed, followed by a discussion period where people elaborate on their answers. These periods can vary in length and intensity depending on the question.

Reports from early play testers support their claims, like that of Amal Gayed, a digital account manager who enjoys debating. "I find it really difficult these days to find people to have a meaningful debate with – everyone is generally too preoccupied or worried to offend someone else. Triggers gives you a platform where you can argue about some of the most sensitive issues without feeling awkward because that's the game!" Others enjoy asserting intellectual dominance, like Melissa Johnson, holding a Bachelor's Degree in Women's studies who said, "I really enjoy playing because I like to try and convince others that my opinion on a given matter is better than theirs. So I like the part where you get to challenge people on their answers." Others simply enjoy learning more about their friends, like Alex Rabbat, sales manager. "I thought I would easily predict the way my friends would answer, but I was often surprised."

The game was developed by the two brothers over the course of about a year in their hometown of Montreal, Quebec. Once the game mechanic was established, they opened up the question creation to people from all walks of life in order to ensure a wide diversity of subjects. "Our playtests were all very friendly and respectful, even when things got heated. Some people even had their minds changed on certain topics," Said Daniel Lajoie. "We'll see how it translates to a larger population, but we're confident that it will do some good."

Triggers will be launching on Kickstarter Wednesday, August 23rd, 2017.

To learn more about the game visit triggersthegame.com where they are offering a free printable demo. 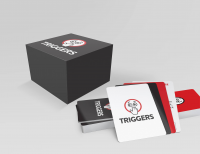 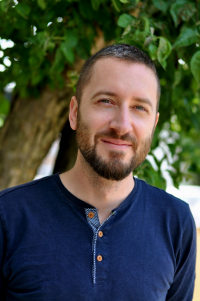