Storytelling is going head to head with stand-up comedy as a great night out. In this show 1 story is totally true as told, the others include some little white lies, and the whole truth comes out by the end with the help of the audience.

Smithtown, NY -- (ReleaseWire) -- 08/19/2015 --Comedy, heart and authenticity will be center stage in the Saturday, September 12 performance of (mostly) TRUE THINGS, at Performing Arts Studio, 224 E. Main St., Port Jefferson, NY, at 7 pm. (mostly) TRUE THINGS features true stories - with a twist - told live, without notes. In this unique show all the stories except one include carefully-crafted deceptions. The whole truth about each of the stories comes out by the end of the show, with the help of the audience. Audience members who correctly identify the "whole-truth" teller get a prize and everyone is welcome to free delicious coffee and tea. Tickets are $15, available online at Brown Paper Tickets or at the door. Call 631-366-4265 to reserve seats. Complete information is available at http://www.mostlytruethings.com. "Like" (mostly TRUE THING on Facebook to get regular updates.

Stories will be told by:

Melissa Gleason, a Continuous Learning and Improvement Coach at a midsize financial institution in the Midwest. She resides in southeastern Wisconsin with her husband John and three cats. When she's not leading large groups of people through Kaizen or Rapid Improvement Events, she's in school pursuing her Master of Business degree or traveling.

Matthew Corcoran a New York born and raised attorney and improv enthusiast who loves to entertain people by making fun of himself. For the purposes of this show please do not assume that he is lying just because he is a lawyer, even though he is very good at it. In addition to working, he is currently a student at the People's Improv Theater and is attempting to write a web series.

Shaun Eli is one of America's smartest comics. A stand-up performer in clubs and corporate gigs, his jokes have been quoted in national media like CNN and Reader's Digest, and sold to Jay Leno and other late night legends. A graduate of the Wharton School, he is also a world-class athlete.

Toni Munna has more than 30 years of acting and directing experience on stages across Long Island. Favorite roles include Bella in Lost In Yonkers and Dr. Livingston in Agnes of God. She organized and directed 7 productions of The Vagina Monologues to support organizations that work to end violence against women and girls. As the first Teeny Award coordinator, she helped develop the high school arts recognition program at East End Arts and ran it for 9 years. It is still going strong and she helped Islip Arts develop a similar program.

Host and creator Jude Treder-Wolff is a writer/performer and singer/songwriter and cabaret artist who has performed at cabaret and comedy clubs in New York and around the country. With musical director Wells Hanley she co-wrote the lyrics and music for the songs used to set up every stage of the game in (mostly) TRUE THINGS. "Self-medicate with real-life therapist Jude Treder-Wolff. Expect the unexpected! And without the hourly rates!" wrote the New York Daily News about one of her comedy/cabaret shows." "Crazytown provides instant relief from the blues" wrote a Karen D'Onofrio in a review on Electronic Link and her solo storytelling show - with all original songs - "Crazytown: my first psychopath" was selected for the 2013 Midtown International Theater Festival, the 2012 Chicago and San Francisco Fringe Festivals and was performed at Actors Theatre Workshop, Broadway Comedy Club and The Pit-The Peoples Improv in New York, at the Charles B. Wang Center at Stonybrook University on Long Island and The Conservatory NJ in Trenton, NJ.

Treder-Wolff will be featured in the Thursday August 27 live performance of RISK! at The Pit-NYC, 123 E. 24th St., New York, NY. Her story "Be Here Now" was featured on the "Turning Points" themed RISK podcast in June and her story "Winter Storm" featured on the Christmas Day 2013 episode of that podcast. 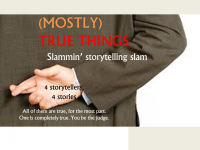