Crowdfunding makes horse racing “by the people and for the people” possible through a democratic process ignited by new adventure magazine True.Ink.

New York, NY -- (ReleaseWire) -- 04/27/2016 --In advance of this year's Kentucky Derby, new online magazine True.Ink is launching a crowd-sourcing campaign to purchase a racehorse. The editors of True.Ink, "a magazine of experiences," are embarking on a first-ever campaign to own a racehorse they can share with their readers.

"For centuries, the experience of owning a racehorse has been open to the very few and the very rich," said Geoffrey Gray, a longtime journalist and founder of True.Ink. "We're changing that history. We're taking the old sport of kings and making us all Kings of the Track."

As part of the program, True's subscribers (or "stablemates") receive exclusive updates and videos on the hunt for The People's Horse, along with the chance to cast interactive votes on decisions like what trainer and jockey the magazine should hire, and what horse they should ultimately purchase. Subscribers will also get the chance to accompany the magazine's editors on trips to the barn where they can interact directly with the stable's racing team, watch training sessions, feed The People's Horse, and attend parties at the track on raceday.

"We're not only trying to tell a great story about what it's like to own a horse," said Gray. "We're trying to put our readers in that story too. It's a full 360-experience."

Horses are notoriously costly, and groups have long owned horses together. But unlike syndicates, who charge as much as $10,000 for a share in a horse, or clubs that are supported by racetracks and charge fees of $500 or more, True Stables offers entry points as low as $25, $100, and $250.

"We want the experience of owning a horse available to everybody," said Gray. "In these divisive and complicated times, we believe there is power in a horse we can all get behind."

As part of the campaign, which starts TK and TK, the magazine is also opening the True Racing Lounge, an experiential exhibit in Lower Manhattan in partnership with The Lodge Gallery, an art space, and Figure 19, a speakeasy-style bar. For two weeks leading up to the Derby, the editors will be hosting an onslaught of parties and programming centered around horses and horseracing.

About True.Ink
True.Ink is a re-imagination of the classic pulp magazine from the 1930's and 40's, and a place where modern adventure stories come to life. Gray, a New York Times best selling author, and a team of journalists, soft launched True last year, debuting with an exclusive video featuring Patriots quarterback Tom Brady, who revealed his secret recipe for pancakes, along with legendary boxing trainer Freddie Roach, who broke down the danger of love and romance in the ring.

Celebrating expertise and innovation, True also revealed tips on running with the bulls in Pamplona, making exquisite beer from rotten-smelling fruit, methods to craft a house- boat from scratch, among others. Along with monthly-family style dinners and other special events, the magazine has been racing General Patton's old schooner boat to Havana and currently has plans to head to Mongolia later this year to search for Genghis Khan's missing tomb. 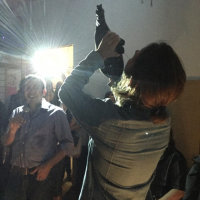