Los Angeles, CA -- (ReleaseWire) -- 12/09/2015 --'Putting the pieces of your life back together after beating a decades-long addiction is a tall order for anyone, but for Lawrence' "Lint" Jones, staying clean and sober may mean facing a future even crazier and more chaotic than his pre-rehab days.

That's the premise behind a made-for-cable television pilot that focuses on the life of Jones (played by Patrick Muldoon), a has-been punk icon living in the shadow of his fame as front man of early 80s bad boys, The Prix, who leaves rehab and winds up mov-ing in with his over-bearing, manipulative Jewish mother (played by the legendary Renee Taylor).

This eclectic menagerie is what greets Jones as he leaves rehab clean for the first time in years. Broke, but finally sober, Lint realizes that he needs to get his sh#t together before he's dead. "Which could be any minute," says Executive Producer Gina La Piana. Trou-ble is, no one wants anything to do with him. Least of all, his family.

Facing a bitter reality and uncertain future, Jones ends up at mother's house and is sure of one thing - not to let Janice turn their already emotionally wrecked daughter into a female version of him.

The pilot episode, currently in production, features the talents of several well-respected actors.

Rock in a Hard Place: Sex, Drugs and Rock and Roll Couldn't Kill Him, But His Family's Willing to Try. 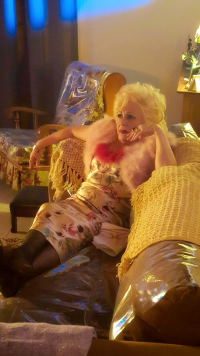