One Night Only in NYC

Warwick, NY -- (ReleaseWire) -- 11/09/2016 --Martin Glynn, CEO of MAD Event Management announced today that they have partnered with Anchor Social, the Diaz Brothers and Joe Schilling to produce an extremely exclusive post weigh in party at the famous NYC club, Stout.

"I've been working closely with Matt Staudt, CEO of Anchor Social for a few years and this is the result of that collaboration," said Marty Glynn, CEO of MAD Event Management. "This is a passion project for us, given that many on our team are interested in mixed martial arts and practice the discipline. We're thrilled to be working with this incredible team of professionals."

"I'm personally excited to enjoy the UFC atmosphere in New York. Nick and Nate haven't had the chance to explore or get to know NYC that well and they are excited for that, as well as looking forward to getting to know their East Coast fans," said Matt Staudt, CEO, Anchor Social. "Our private Meet & Greet event is a hybrid that we felt offered the most value to the fan and the fighter and created a very organic and fun environment for them to interact."

The lineup for the signing includes:

Luke Rockhold: Special Guest, UFC Star and former UFC Middleweight Champ will be making a late appearance to mix and mingle with fans.

Tickets are extremely limited and are available through advance purchase only here. 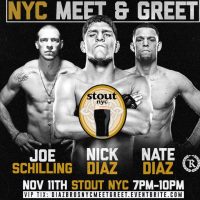