Smart Crowdfunding is slated to carry out strategic marketing initiatives for the ‘UltraPower’ crowdfunding project on Indiegogo. This campaign endeavors to raise the funds needed to bring an innovative portable power bank to market.

Memphis, TN -- (ReleaseWire) -- 10/07/2014 --A technology company based in Memphis, Tennessee launched an Indiegogo crowdfunding campaign on September 13th in order to introduce their innovative UltraPower invention to the public. UltraPower is a portable waterproof power bank that can be used to charge most modern electronic devices. It has enough power to fully recharge the average smartphone up to 12 times. When asked why they came up with the idea of UltraPower the makers simply state, “You can never have enough power!” In the modern age, with technology being a very real aspect of our daily lives, it is easy to agree with that statement.

UltraPower is completely wireless, highly portable, and smaller in size than the average coffee mug, weighing only 300g. It is powered by 7 lithium ion battery cells which hold enough power to fully recharge smartphones, tablets, digital cameras, and a variety of handheld gaming devices. The charging port automatically adjusts the output in order to suit the device it is charging. Due to the portability of UltraPower, it is perfect for use when traveling, on camping trips, outdoor activities, road trips, or anywhere a user may need extra power to keep their devices charged and ready for use. “With this manageable mobile charger you are always equipped with a back-up battery whenever and wherever you need it!” Not only does the UltraPower charge electronic devices, but it also doubles as an LED light, which can be turned on with a simple tap or shake.

The UltraPower team has completed all of the essential groundwork for their product, and are ready to start the full production phase which is why they have launched their Indiegogo crowdfunding campaign. This campaign has a funding goal of $1,500, which needs to be raised by November 12th in order to begin mass production of the UltraPower power bank. All of their supporters have the opportunity to pre-purchase UltraPower at a greatly discounted rate. As an added bonus to all of their supporters, they are also offering multiple perk levels with their campaign. These perks, which serve as funding incentives, gives UltraPower campaign supporters the opportunity to get up to 5 devices for free with purchase. These devices are very reasonably priced, and the opportunity to get one for free with a certain purchase makes it even better. Full details can be found on their campaign page.

About UltraPower
UltraPower is headquartered in Memphis, Tennessee, and is the brainchild of a group of talented individuals from two different companies: MicroElements and Goingwin. MicroElements is a technology company that focuses on designing, developing and selling personal computers, electronics and online services. Goingwin is an international industrial design organization specializing in design, modeling, material, technology and production.

To learn more about the UltraPower crowdfunding project Click Here 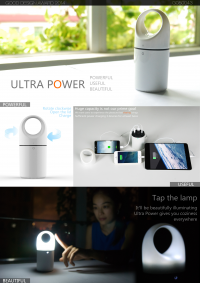